Watch: These Tiny Soft Robots Can Change Shape When Needed Able to Reconfigure When Needed

There is absolutely no limit to what science can achieve and conquer. Since the past few decades we have seen a tremendous amount of growth and improvement in science and technology. General public are getting accustomed to tech and gadgets more than ever. And this inspires newer and better things to get innovated.

With that being said, science does not cater only to comfort but has also proved to be fundamental in dealing with various global issues. Speaking about robotics, we have now deployed robots for almost all missions. There is a huge scope for robotics in search and rescue operations as they can reach places humans are unable to.

Jianguo Zhao who is currently teaching as an assistant professor in the department of Mechanical Engineering from the Colorado State University Powerhouse Energy Campus has now created small and lightweight robots which are able to configure themselves responding to a need.

While explaining the process Jianguo Zhao said, “In general, if you have a robot, its mechanical structure is fixed.” He further added that, “If we can change the mechanical structure on the fly, without redesigning the robot, this is pretty useful, especially if the robot is very small … I don’t think many people are trying to do that.”

The robots developed are small in size and are also capable of changing their shape as a response to their environment. These robots can be useful for a number of purposes. Being small in size provides them with an advantage that the big and rigid robots do not have.

These robots could be used for military applications and environment monitoring. They can prove to be extremely useful in search and rescue operations. All possible because they are small in size and can change the shape. 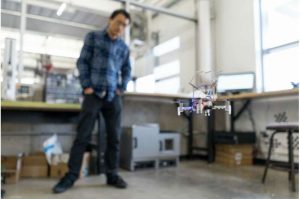 It is similar to a small and wireless robot deployed in a disaster zone. They are capable of avoiding any sort of obstacles and changing the shape of their joints. These robots can withstand different kinds of terrains without expending energy.

While speaking about the working process at the lab Jianguo Zhao said, “The best thing about our lab is working together on difficult problems.” He added further, “When we are building robots, you can see the results, but it takes trial and error. You cannot expect it to work the very first time.”

Due to their small size these robots can access hard to reach places and can easily squeeze in narrow openings. They can carry out a lot of functions such as collecting data for environmental purposes without disturbing the sensitive surrounding much.

The discoveries made in the robotics field lately have been phenomenal. With more focus on rescue and sustainability one can always expect something much better to be delivered in the coming year. It will not be an exaggeration to say that this field is one of the most exciting sectors in the science field.

Jianguo Zhao has been awarded with a $500,000 grant from the National Science Foundation. He along with Bob Cheng is in the process of developing flying robots that can perch like an insect. This research is taking place with both their winnings from the grant.