Science and technology often derive their inspiration from nature. They try and imitate the qualities and capabilities of organisms artificially. With the latest advancement in science, we can say that they have been successful in that process.

Most of the time the robots which are developed for a certain type of environment, usually are designed to have similar features as the creatures found there. Recently, researchers at the MIT University have now come up with a robo starfish which will allow close interactions with aquatic life a new possibility.

The robot was developed by a team headed by two professors from MIT namely Wojciech Matusik and Daniela Rus. The team developed a soft robotic starfish which was made with silicon foam. This robotic starfish is capable of moving around with the help of a single low powered actuator.

The paper about this robotic starfish is jointly authored by Josephine Hughes, who is a CSAIL postdoc and Tao Du who is a PhD student.

Providing a brief explanation about the entire process, Josephine Hughes said, “The passive interactions between an underwater robot and the fluid forces around it—whether it’s a calm current or an undulating wave—are much more complicated than when a robot is walking on stable terrain, which makes creating its control systems quite difficult.”

She further added that, “But using this simulator, a process that might normally take days or weeks can happen in just a few hours.” 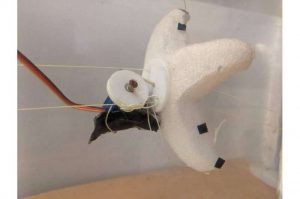 This robot starfish is capable of using tendons located in its four legs in order to move around. These are connected to a servo motor, this is the motor which is used to flex and relax the legs. The team has developed a new tool that can speed up the production process of the robot to a great extent. This simulates and fabricates a functional soft robotic starfish in a matter of hours.

Tao Du explained that the reason behind why the team chose a starfish to design a robot is its simplicity and the elegance in its motion. It creates a forward movement by squeezing and releasing its legs.

Josephine Hughes said, “With the robot starfish we learned that, in addition to those quite visible leg propulsions they do, there are some subtler high-frequency movements that can give them important momentum.”

The researchers group made use of machine learning in order to carry out initial simulation and design processes of the control mechanism of robot starfish. Once ready, this process was then rapidly duplicated.

The prepared model was then put under real life conditions to carry out experiments and to also collect more data about the robot. This data helped the researchers to improve and optimize the robot’s design.

In order to get the robot a more natural look the team made use of silicone foam. Silicone foam has excellent elastic properties, can provide natural buoyancy and it can easily be fabricated very quickly. Nowadays, researchers and scientists are more and more inclined towards soft robots as they are more resilient when it comes to recovering from collision.

CSAIL is now focusing on projects to build soft robots. The tool developed by the team will prove to be useful while measuring data at different locations in the deep ocean.