Wikileaks has received a total of a little more than 2.2 million dollars 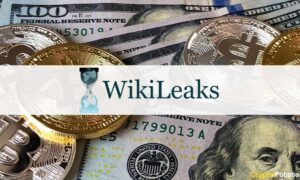 With 145.45 Ethereum worth at about $587,883 USD, Wikileaks’ Ether address appears to be the second most popular donation site. Wikileaks has received a total of a little more than 2.2 million dollars.

Wikileaks is based in the United Kingdom that publishes classified information and media leaks obtained from anonymous sources. Julian Paul Assange, an Australian activist, publisher, and editor, founded the group in 2006. Julian was detained in London in 2019 after being charged in the United States in 2010 with attempting to hack into the Pentagon’s computer network.

It relies on donations from individuals and businesses to fund its mission and operations. However, several providers have refused to fund the organization since they published very sensitive information on a variety of themes. Visa, MasterCard, AmEx, and other credit cards are examples. This is why they’ve turned to cryptocurrencies, the only form of currency that can’t be censored.

Wikileaks is supported by individuals and organizations who believe in its mission and activities. Several companies, on the other hand, have dropped support for the group after disclosing highly sensitive material on a variety of themes. This would include American Express, MasterCard, and Visa, among others.

As a result, they’ve resorted to the sole non-censorable form of exchange, namely Bitcoin. According to Wikileaks’ website, Bitcoin, Litecoin, Bitcoin Cash, Ethereum, ZCash, and Monero are currently available for charity contributions.

Julian Assange, the founder of Wikileaks, said in 2017 that the organization had achieved a 50,000 percent profit on Bitcoin since investing in the cryptocurrency in 2010.

Surprisingly, the tweet claiming this was sent out in October 2017, when the price of Bitcoin was hovering around $5,000. Given that BTC peaked at roughly $20K at the time, this number would have been closer to 200K percent ROI later that year.

My deepest thanks to the US government, Senator McCain and Senator Lieberman for pushing Visa, MasterCard, Payal, AmEx, Mooneybookers, et al, into erecting an illegal banking blockade against @WikiLeaks starting in 2010. It caused us to invest in Bitcoin — with > 50000% return. pic.twitter.com/9i8D69yxLC

Julian Paul Assange, an Australian activist, publisher, and editor, launched Wikileaks in 2006. He was arrested in London in 2019 after being charged in the US with conspiring to hack into a Pentagon computer network in 2010.

Also read: Everything You Need to Know about DeSo