One of the Most Visited Torrent Site Shuts Down 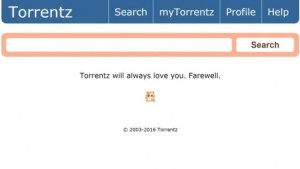 Three weeks after search engine Kickass Torrents was shut down following the arrest of alleged founder Artem Vaulin in Poland, another major player Torrentz.eu shut its portals on Friday, a media report said.

Torrentz.eu bid adieu to its millions of users with the message “Torrentz will always love you. Farewell.”

Founded in 2003, Torrentz had millions of visitors per day the site grew out to become one of the most visited torrent sites.After more than 13 years of service, the popular site announced its farewell just a few hours ago, that too without any warning, Next Web reported. The owner of the website reportedly refused to comment.

It seems that the decision to shut down was mainly taken due to legal pressure on piracy websites after the KickassTorrents crackdown. Another website, Solarmovie, also gave up fearing legal action.

KickassTorrents is accused of distributing over $1 billion worth of illegally copied films, music and other content. Vaulin is alleged to own KickassTorrents or KAT, which in recent years has eclipsed Pirate Bay and others to become the world’s biggest source of pirated media.