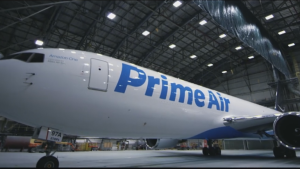 Online giant Amazon unveiled its first branded airplane Amazon One today, part of what is expected to be a fleet of “Prime Air” cargo planes.

Amazon over the past year began working with aircraft leasing firms and cargo operators to reduce its dependence on commercial carriers, but Friday’s announcement is the first to show its own branded aircraft.

Amazon One was showcased at the Seafair Air Show in its hometown of Seattle, Washington. The Boeing 767-300 was to participate in a flight demonstration as part of the air show.

“I cannot imagine a better way to celebrate the inaugural flight than in our hometown at Seafair alongside Amazon employees and Seattle residents.”