Amazon To Invest Another $3 Billion In India, Says Bezos 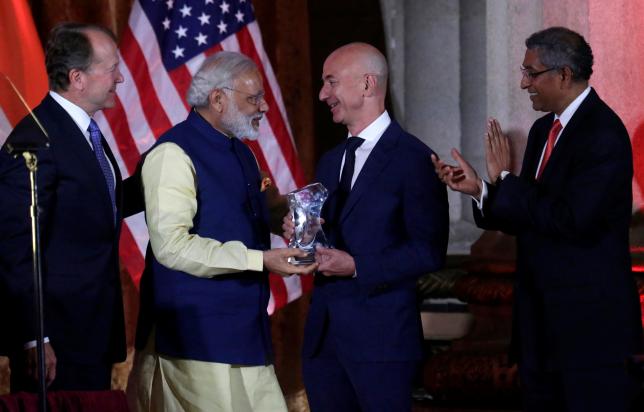 08 Jun. 16, WASHINGTON: Amazon Inc. will be investing additional $3 billion in India, to boost its committed investment in the country to over $5 billion, Chief Executive Jeff Bezos said on Tuesday.

Bezos said an event in Washington that was attended by Indian Prime Minister Narendra Modi, who met President Barack Obama earlier on Tuesday that India was Amazon’s fastest growing region.

According to sources and reports by Reuters, Bezos said, “”I can assure you it’s only the beginning and as we say in Amazon, it’s only day one. The investments would help start-ups in India and accelerate the country’s role as a hub for innovation and digital entrepreneurship.”

Bezos said that the company will be opening Web Services Cloud Region in India, this year and the country would become home to the firm’s largest software engineering and development center outside USA, located in Hyderabad.

The Hyderabad center will also create jobs and career development opportunities for several people and a symbolic number of jobs would be created over time by stationing Amazon Cloud Services.

Tech Story had reported on 2nd of June that the company would invest $200 million (Rs. 1,350 crore approx.) in its India unit this year to accelerate its growth.

Amazon opened on the Internet marketing in July 1994. Headquartered at Seattle, Washington, it was founded by Jeff Bezos. Amazon launched its operations in India in the year 2013. Through its website amazon.in, a marketplace which is operated by Amazon Seller Services Private Ltd. Amazon will complete three years in India, this week.

Amazon India – The Rise Of Amazon.in(dia) !!