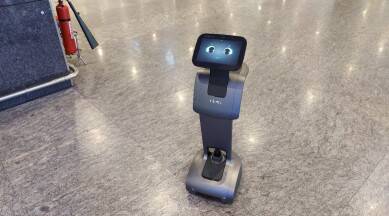 The authorities of Bangalore’s Kempegowda Airport recently announced that they have purchased and deployed 10 robots in their airports to help the thousands of passengers that travel through the airport on a daily basis.

Currently these robots have only been deployed in the first terminal of the international airport, but according to reports, the airport authorities will scale up this initiative and deploy even more robots if the first phase of this project runs well shows successful and objective results. These robots have been deployed across many international gates and in the duty free shopping centres to assist people and help them reach their gates, planes, or destination quicker and easier. They have also been sprawled across the baggage belt area where they will help passengers figure out what belt their luggage is in and they have also been deployed outside many wash rooms and toilets. They are also monitoring the drinking water facilities and a few other areas too.

Sampreeth Sadanand Kotian who is the head of terminal operations in the Kempegowda International Airport said that these robots have a whole lot of responsibilities and they will mainly be answering the commenters questions and doubts. They will also show them the location of the place they have to go to even tell them how to get there. They plan to add more robots not only in that terminal but all across the airport. But first, they will have to be evaluated and their artificial intelligence operating system should be worked on and revamped to be more efficient.

The Bangalore airport is currently the third most busiest airport in the country after Delhi’s Indira Gandhi International Airport and Mumbai’s Chhatrapati Shivaji Maharaj International Airport. The airport had well over 16 million passengers in 2021 despite the second wave of the coronavirus and the lingering effects of the pandemic still affecting the country. It recently broke the top 30 busiest airports of Asia finishing the year of 2021 on 29th place as their traffic went up by 22.4% in the span of just a year.

Bangalore has always been the torch bearers of technology in India as they have been the home to India’s innovations for decades. Once Bangalore show cases the success of these robots in their airports, it is very likely that other major airports across the country including, Delhi, Mumbai, Kolkata, and Chennai will also adopt them and make the life for commuters much easier.