Soon Robots To Be At Your Doorstep To Deliver Pizza; Trial Successful by Dominos 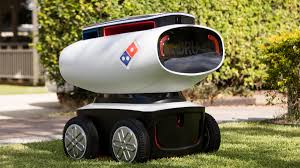 18 March 2016 : Pizza giant Domino’s has unveiled an autonomous pizza delivery robot that is being trialled in New Zealand.

On Friday the company unveiled the Domino’s Robotic Unit (DRU), and announced that the bot had already carried out its first successful pizza delivery on March 8. “DRU is an autonomous delivery vehicle and is set to take the world by storm,” the company wrote in a statement on its website.
Domino’s Australia-based skunkworks DLab, the vehicle’s development started in 2015 and was pushed towards commercialisation.

According to a promotional video, DRU uses software developed by the Australian military contractor Marathon, which manufactures autonomous robots with obstacle-avoidance capabilities.

This feature has been incorporated in DRU, which according to Domino’s can dodge hurdles thanks using on-board sensors. The autonomous four-wheeler is about one metre tall and contains two different compartments to keep beverages cool and pizzas (up to ten per robot) hot, which customers can unlock with an order-specific code. It can carry out a delivery within 20 kilometres from the store before needing a battery charge, and it is designed to move on both footpaths and roads.

Regarding the safety of cute-looking automaton on how it would defend its precious cargo from glutton thieves or random troublemakers, the company said in Facebook posts that “We will be taking every precaution necessary to ensure he is safe including surveillance and security etc.”