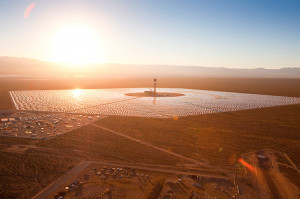 A small fire shut down a generating tower Thursday at the Ivanpah Solar Electric Generating System, world’s largest solar power plant, leaving the sprawling facility on the California-Nevada border operating at only a third of its capacity, authorities said.

Firefighters had to climb some 300 feet up a boiler tower at the Ivanpah Solar Electric Generating System in California after fire was reported on an upper level around 9:30 a.m., fire officials said.

The plant works by using mirrors to focus sunlight on boilers at the top of three 459-foot towers, creating steam that drive turbines to produce electricity.

Unit 1 of the project was connected to the grid in September 2013 in an initial sync testing. The facility formally opened on February 13, 2014, and it is currently the world’s largest solar thermal power station. 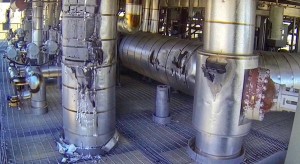 David Knox, spokesman for plant operator NRG Energy, said it was too early to comment on the cause, which was under investigation.

The fire was located about two-thirds of the way up the tower, said Jeff Buchanan of Nevada’s Clark County Fire Department, which also responded to the blaze.

Plant personnel had the fire out by the time firefighters reached the spot, and it was officially declared out in about 20 minutes.

Knox said the tower was offline while crews assess the damage. He could not immediately say when it would restart. The plant can produce enough power for 140,000 California homes, but a second tower is shut down for maintenance, leaving only one running.

It was not immediately clear what impact that would have on California’s electricity supply. It was the first fire at the plant, which opened two years ago on federal land in the Mojave Desert about 45 miles southwest of Las Vegas.

The $2.2 billion complex has nearly 350,000 computer controlled mirrors — each roughly the size of a garage door — that sprawl over roughly five square miles of desert