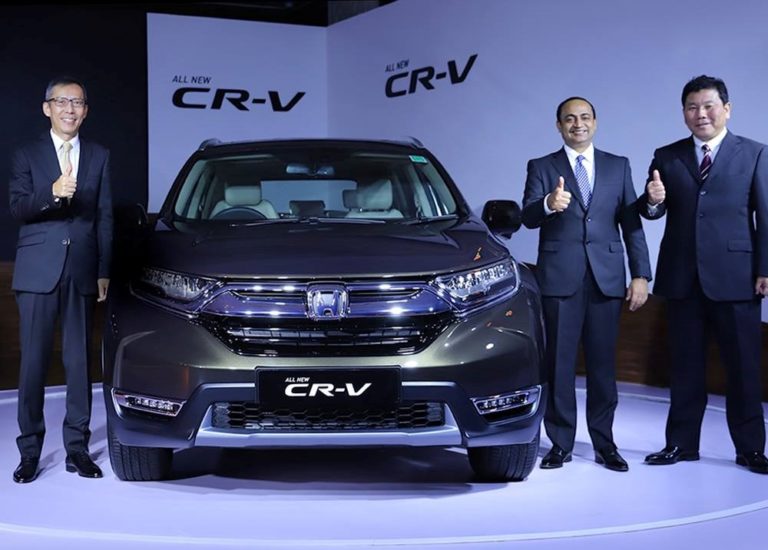 Honda has launched the fifth generation of CR-V in the Indian market today. The CR-V will be available in both petrol and diesel variants. The petrol one is priced at ₹ 28.15 lakh, while the diesel 2WD model will cost ₹ 30.65 lakh, and the top-spec diesel with all-wheel drive will be sold for ₹ 32.75 lakh (all prices ex-showroom, India).

The CR-V has got a lot of design changes from the last generation. The front face, with that bold single slate chrome grille, looks muscular and bold. The ugly rear end, thankfully, has been reworked and the new CR-V has a lot better shaped and finished rear profile. The Volvo-fame huge L-shaped taillamps and the wide full-width chrome lining grabs instant attention at the rear.

Unlike the previous generation CR-V, the latest version will be offered with a diesel engine also. It gets the new 1.6-litre Earth Dreams motor which produces 120hp and 300Nm of torque. This motor comes paired with a 9-speed automatic transmission and will be available in front-wheel drive and all-wheel drive options.

The petrol version, on the other hand, gets a 2.0-litre four-cylinder unit that makes 156 hp and 189 Nm of peak torque. The petrol motor comes mated to the seamless CVT gearbox. Unlike the diesel, petrol version only comes with front-wheel drive option.

Inside the cabin, the interiors look more premium and sophisticated. There is a 7.0-inch touchscreen infotainment system at the middle of the dashboard that offers Apple CarPlay and Android Auto connectivity. In the diesel variant, the gear know is replaced with buttons fitted just under the infotainment screen. Honda has pulled off this change flawlessly in the dash.

For the first time ever, Honda is offering the CR-V in a 7-seat layout also. It will be available as an option only in the diesel version though. The list of other features includes a panoramic sunroof, dual-zone climate control, automatic LED headlights, electric parking brake, leather upholstery, push-button start, and an eight-way adjustable driver’s seat.

Presenting the All-New Honda CR-V to customers in India, Mr Gaku Nakanishi, President & CEO, Honda Cars India said, “Today, we launch the globally successful All-new 5th Generation Honda CR-V which has captured the imagination of SUV lovers across the world. We strongly believe that the new CR-V has the potential to be a game-changer in Premium SUV segment and we foresee a shift in consumer preference towards more luxurious and comfortable SUVs.”

In the India market, the CR-V takes on the likes of Hyundai SantaFe, and now with the 7-seat options, it will try to steal customers from the Toyota Fortuner and Ford Endeavour.