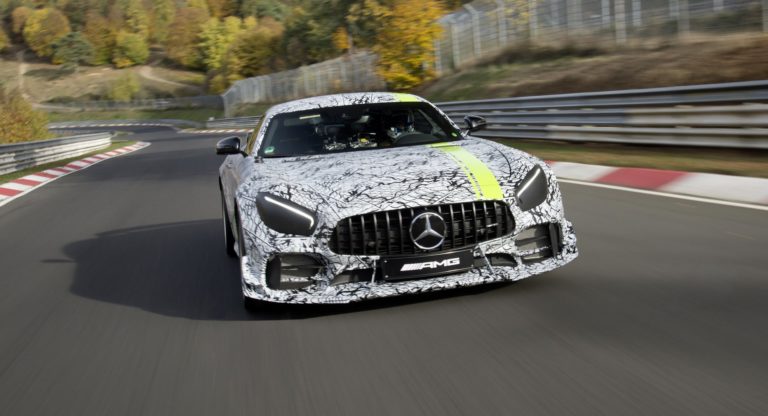 The 2018 Los Angeles Auto Show is just about a week away and we have already started feeling the heat! The guest list of the LA Auto Show is expected to be full of exotics and hosts numerous global debuts on its floor. One of such name that has joined the list comes from Germany.

Mercedes-Benz has confirmed and teased the more hardcore version of its flagship supercar the AMG GT R and it will be called the AMG GT R PRO. The GT R PRO is likely to be more track focused than the standard GT R. It also has taken some design cues from the recently revealed 4-door AMG GT Coupe.

The standard AMG GT R already churns out 577 horsepower from the 4.0-liter twin-turbo V8 motor. Though there is no official word on the performance of the PRO version, it is likely that the track-focused variant crosses the 600 hp mark. The car is also expected to lose some weight as the mandatory track diet must have been applied.

Mercedes will officially reveal the GT R PRO on the 28th of this month at the LA Auto Show. The car will be joined by other models of Mercedes including the recently launched GLE SUV, the new A35 AMG and the all-electric SUV EQC.