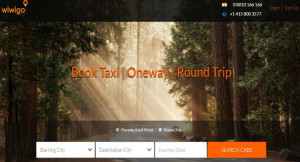 The startup is looking to use the funding to expand its operations to more than 100 cities by the end of the current year.

Wiwigo is an online platform to search, compare and book outstation one-way and round-trip cabs and was launched in April 2015. Wiwigo’s services are available in over 40 cities in India, including Delhi, Bangalore and Pune. The company currently has 5,000 cabs and claims to have served around 25,000 customers to date.

Sunil Chaula, Founder and CEO, Wiwigo said, “We aggregate demand on both the cities connected by a route and provide back-to-back bookings to our fleet, bringing down the cost to customer by up to 50%. The inter-city taxi market is mostly unorganised and dominated by offline agents. We aim to standardise it while adding value to the customers. With the growing number of drivers and vehicles, we shall be able to introduce ‘power smart pricing’ for customers in near future. This would enable customers to cut travelling cost by 20% more.”

“The team (Wiwigo) is determined and supported by great execution skills to build a profitable venture around a scalable ecosystem of vendors, OTAs and other travel service providers,” Garg said.