SpotMini Shows Off His Capabilities; Acquires Attention in No Time 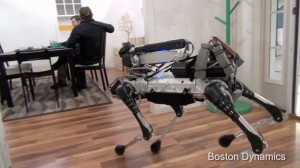 SpotMini- one of the quietest robot Boston Dynamics has ever built, can do wonders. It can be seen doing household chores and slipping on a banana peel (Yes, check the video!).

The motive to build SpotMini seems to have been to make a robot quiet enough, small enough, and clean enough that it can be used as a house robot. It’s shown indoors walking up steps and ducking under tables.

According to the desciption, SpotMini is all-electric (no hydraulics) and runs for about 90 minutes on a charge, depending on what it is doing. It has a variety of sensors, including depth cameras, a solid state gyro (IMU) and proprioception sensors in the limbs. These sensors help with navigation and mobile manipulation. SpotMini performs some tasks autonomously, but often uses a human for high-level guidance. Who won’t adopt such a puppy!?

Currently, Boston Dynamics is owned by Alphabet, but rumors suggest that Google’s parent company is looking to cut the division loose over concerns that a domestic-scale robot is still too far out. Amazon and the Toyota Research Institute were both being considered as possible buyers. A price for the deal has not yet surfaced, but the ink was “nearly dry” last month — so things are probably pretty close to becoming official.