DoorDash is a technology company that connects people with the best in their cities.Doordash works by empowering local businesses and in turn, generate new ways for people to earn, work, and live. They started by facilitating door-to-door delivery, but we see this as just the beginning of connecting people with possibility and now Doordash is known for its food delivery.

DoorDash is an On-Demand logistics based startup, that acts as an intermediary between merchants and the prospective buyers who wish to get products from local merchants delivered at their doorstep. Founded in 2013, currently, DoorDash is only working on food delivery.

Doordash behaves like a mediator between the consumers and producers or sellers.

DoorDash serves by delivering from the restaurant to the doorstep of customers who place food orders online through DoorDash. For the same, DoorDash charges a commission percentage out of each and every order delivered. Usually, the percentage of commission from restaurants is 20%.

DoorDash hires its own drivers, who are called Dashers. The delivery rate depends upon the distance of travel and DoorDash’s tie-up with the restaurant in consideration, but on average, the DoorDash delivery fee is $5 to $8 per order.

An initial public offering (IPO) refers to the process of offering shares of a private corporation to the public in a new stock issuance. Public share issuance allows a company to raise capital from public investors. The transition from a private to a public company can be an important time for private investors to fully realize gains from their investment as it typically includes share premiums for current private investors. 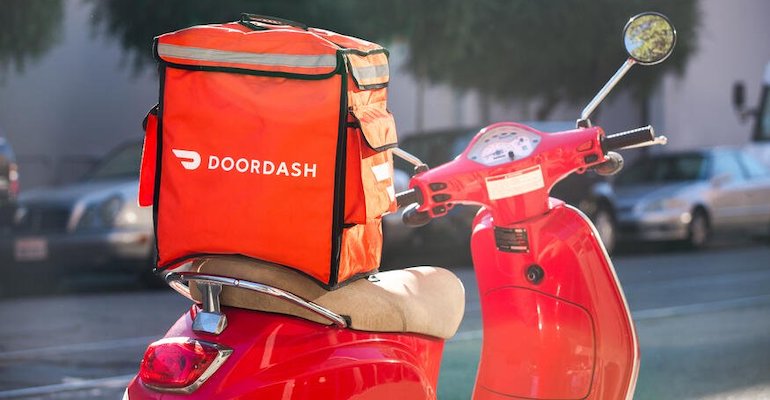 Doordash is the topic of the town, the new investor. The famous food delivering platform went live on public last week

If you’re a fan of revenue growth, you’ll find plenty of it in DoorDash. The top line more than tripled last year, up 204% to hit $885 million. Business is actually accelerating in 2020, soaring another 226% through the first nine months of 2020.

Business picking up this year isn’t a surprise. The pandemic has forced restaurant operators large and small to embrace the off-premise convenience provided by third-party delivery apps. Roughly half of last years $600 billion in U.S. restaurant sales were being consumed offsite. One can only imagine how that metric is faring in 2020 when some eateries don’t have a choice given indoor dining restrictions and consumer fears of contracting COVID-19 in indoor spaces where folks naturally have to remove their masks to eat and drink.

The news gets even more encouraging for DoorDash as we work our way down the income statement. Margins have improved dramatically this year to the point where DoorDash has generated positive contribution profit and adjusted EBITDA through the first nine months of 2020.

DoorDash was a clear winner of the pandemic. It reported revenue of $1.92 billion in the nine months through the end of September, more than 200% above the $587 million for the same period last year, according to the prospectus filed for its planned initial public offering. It had 543 million orders through September, compared with 181 million in the same period a year ago.

Even so, the company continued losing money. Its net loss in the first nine months of this year was $149 million, compared with a loss of $533 million a year earlier. In the second quarter, DoorDash squeezed out a $23 million profit, but returned to a loss in the third quarter. It also said that the growth in orders spurred by the pandemic would likely slow.

The prospectus did not specify the value of shares that DoorDash would sell. The company was valued at $16 billion as part of a $400 million private funding round in June. It has raised nearly $3 billion in total capital, according to Pitchbook, which tracks startup funding.

DoorDash planned to go public earlier this year, filing confidentially with the Securities and Exchange Commission in late February. But the pandemic halted the IPO market. DoorDash and other delivery companies instead focused on responding to a flood of demand from customers, as restaurants closed and people stayed home because of the pandemic. In late summer, an ebullient stock market revived tech IPOs, with companies like data startup Palantir and data warehousing company Snowflake making their public debuts. Airbnb is expected to file its offering prospectus next week.

Even so, DoorDash faces challenges, such as its lack of profits. Other gig-economy companies, such as Uber and Lyft, have faced similar questions about whether they can become viable businesses.

DoorDash, however, is no longer burning through cash. In the first nine months of the year, its business generated $315 million of cash; in the same period of 2019, it consumed $308 million of cash.