According to a report released this week, the majority of game makers in the United States and the United Kingdom are now utilizing blockchain features in their games.

The study, commissioned by Stratis, finds that the popularity of blockchain, NFTs, and the new play-to-earn model in the crypto market is forcing game producers to alter traditional game development methods to attract new players and reach new markets. 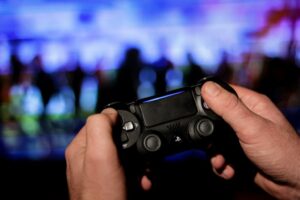 According to the findings, 58 percent of developers are starting to employ blockchain technology, and nearly half of those surveyed (47 percent) have begun to use nonfungible coins (NFT).

Blockchain technology, tokens, and NFTs, according to Stratis CEO Chris Trew, are critical technologies for new digital worlds and gaming experiences. “They allow users to have a stake in the games they play by allowing them to buy land as an NFT in a metaverse game or a car in a racing game,” he explained.

“Games have always been pay-to-play, with the value accruing solely to firms and platforms. Blockchain and NFTs completely flip this circumstance,” Trew added.

According to the report, the top three benefits of blockchain for the video game business include new gameplay (61percent), preserving value for players by keeping money in the game (55percent), and rewarding players with real-world value (54percent).

While independent game developers were the first to embrace blockchain and NFT, with about 20 of them using the Stratis blockchain, Trew believes that major developers, often known as AAA companies, will follow suit. Epic Games has integrated blockchain games into its platform, and Ubisoft and Electronic Arts have expressed interest in the technology.

According to Trew, game developers will take the network effect of play-to-earn games into account, or gamers will just migrate to games that pay them for their time. “Gamers are fervent. It’s innovative to give people a stake in the game, allowing them to earn money in the metaverse the same way they do in the real world.”

With the popularity of the play-to-earn model expanding, blockchain technology is quickly becoming the go-to foundation for video game makers.

What are your thoughts on blockchain and NFTs becoming more widely used in video game design? Tell us what you think in the comments section below.