Reinforcement learning is very vital concept when it comes to machine learning. It allows the machine learning models to make a sequence of decisions. This help the machines to achieve the assigned goal even under uncertain and potentially complex environment. Under this methodology the artificial intelligence deployed is faced with a game like situation and the computer uses trial and error method in order to come up with a solution for the given task.

In order to make the machine learn and perform the task programmer wants, it is often given rewards or punishments based on the task performed. The model is given no assistance or supervision on how to complete or perform a task.

This method called reinforcement learning has now been used on a pair of robot legs called Cassie. This robot has been able to learn a lot movements without any prior knowledge. Some of the task it can successfully perform include walking in a crouch and walking while carrying an unexpected amount of load.

There are a lot of functions that Cassie can’t perform as yet but the very fact that this robot has been able to teach itself how to walk is commendable. Upon further developments it can now be possible to deploy these robots in an unexpected terrain where they can recover upon any damage faced or even a stumble.

Tech giant company Google has been trying to develop a robot capable of performing similar tasks. A group of researchers at Google have been able to develop a robot capable of teaching itself how to walk with the help of an Artificial Intelligence (AI) known as deep reinforcement learning. This robot has been able to walk without little human intervention. 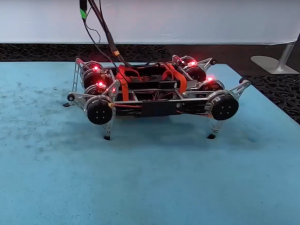 This robot is still not completely independent. It was kept under the researcher’s supervision as there were times when it would fall over or would leave the space it was meant to be learning in. the researchers were then able to design an algorithm for this robot which helped it to stand up when it fell and kept it from wandering off.

Researcher Jie Tan said, “A lot of places are built for humans, and we all have legs […] If a robot cannot use legs, they cannot navigate the human world.” Which is why technology to make robots learn walking by themselves is considered to be important.

This robot took the time of 1.5 hours to learn how to walk on flat surfaces. Up next, it took around 5.5 hours in order to move forward and backward on a squishy memory foam mattress. It learnt how to walk on doormat in a matter of 4.5 hours.

Compared to that, Cassie’s case was different. In a real world scenario, teaching a comparatively large robot through trial and error method can prove to be dangerous. In order to solve this, the team of researchers at the University of California, Berkeley utilized two levels of virtual environment.

Zhongyu Li, a team member of this project gave a statement about the videos of robots teaching themselves how to walk, “These videos may lead some people to believe that this is a solved and easy problem. But we still have a long way to go to have humanoid robots reliably operate and live in human environments.”