Day after day we get to know about newer advancements in the robotics field. The robots which are developed, are high tech and can perform and assist in a lot of functions considered to be too tedious or dangerous for humans. With that being said, a snake like robot which was developed by the Carnegie Mellon University is now able to function even underwater. 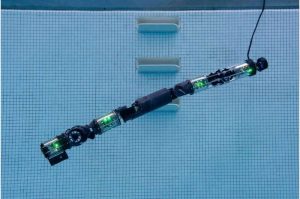 This makes the snake robot capable to perform inspections of the ships and the submarines and the infrastructure present there for any sort of damage. The robot was tested at university pool where it was able to dive through underwater hoops. This robot is capable of smooth and precise swimming and is easy to control.

Nate Shoemaker-Trejo, who is currently working as a mechanical and mechatronics engineer in the Biorobotics Lab and is working on the Hardened Underwater Modular Robot Snake (HUMRS) said, “The distinguishing feature is the robot’s form factor and flexibility. The smallest versions of regular submersibles are usually blocky, one-piece arrangements. The robot snake is narrow and jointed.” He further added that, “The end result is that an underwater robot snake can squeeze around corners and into small spaces where regular submersibles can’t go.”

Advanced Robotics for Manufacturing (ARM) Institute provided a grant for the development of the submersible robot. According to Matt Fischer, the program manager working on this project at the ARM Institute, this project is aimed to assist the Department of Defense. This robot will assist in functions such as inspecting the ships and the submarines along with the other kinds of underwater infrastructure for any kind of damage. This would be a part of its routine maintenance.

Matt Fischer who has also served three years at the Navy said, “If they can get that information before the ship comes into a home port or a dry dock, that saves weeks or months of time in a maintenance schedule, and in turn, that saves money.”

This robot snake will make the Navy capable of inspecting the ship which is at the sea. It can immediately alert the crew of any critical damage. And is also capable of sending information about any issues that need to be attended to when the ship docks at the port.

The Hardened Underwater Modular Robot Snake (HUMRS) is not only useful for the military processes but can also prove to be vital for businesses. This robotic snake is capable of inspecting underwater pipes for any damage or blockages, can assess offshore oil rigs, it can also be able to check the integrity of the tank when it is filled with liquid.

The robot snakes design is such that it makes it easy for the robot to adapt to different tasks. It can squeeze through tight spaces under the rubble, it is capable of climbing up a tree and can slither around a corner underwater.