On Thursday, an imposing bronze statue honouring the unknown creator of the Bitcoin digital currency was revealed in Budapest, Hungary’s capital. Its creators claim it is the first of its kind in the world.

The bust sits atop a stone pedestal etched with the name Satoshi Nakamoto, the pseudonym of the mysterious Bitcoin innovator whose true identity is unknown. The unveiling took place in a business park near the Danube River in Budapest. 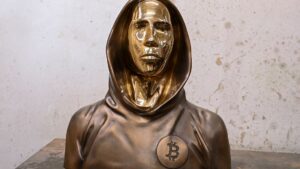 The founding father of the entire cryptocurrency sector.

Andras Gyorfi, a Bitcoin journalist and the project’s originator, described Satoshi as “the founding father of the entire cryptocurrency sector.” “He is the deity of our market since he invented Bitcoin and blockchain technology.”

The bust’s featureless face is heavily shiny to make it reflective like a mirror in which onlookers may see themselves, and it is in a bronze hoodie brand rapper with the Bitcoin emblem.

“It was a huge undertaking. Making a portrait sculpture of someone we don’t know exactly how they appear like is quite difficult”. Gilly told The Associated Press. “I hope that by using sculpture as a medium, I was able to represent the essential concept of Bitcoin. Which is that it belongs to everyone and no one at the same time.”

Bitcoin was founded in 2008, in the aftermath of the global financial crisis. With the goal of circumventing existing financial institutions. Its aim was to provide safe technology for peer-to-peer internet transactions without the use of intermediaries such as banks.

Nakamoto is a pseudonym that could refer to a person or group of persons of unknown gender, age, or country origin. Said the organization’s first white paper, which p that year.

According to Gyorfi, the organisers of the monument project invited Nakamoto to the unveiling. They did so in the hopes of finally learning the Bitcoin inventor’s genuine identity.

Efforts to increase awareness about blockchain and cryptocurrency

The event drew hundreds of people. Yet, no one has stepped forward to claim credit for creating the cryptocurrency that has drawn tens of millions of investors. And also, recently became a legal tender in El Salvador.

The statue, according to Gyorfi, is a tribute to Nakamoto and an effort to “increase awareness about blockchain and cryptocurrency.”

He raised roughly $10,000 in cryptocurrency donations with the help of other Hungarian Bitcoin aficionados to fund the bust’s production.

However, because “unfortunately, the sculptors and other service providers do not accept Bitcoin yet”. He had to transfer the money into Hungarian currency.