After Cabinet’s approval, Govt. to introduce new crypto-law in Parliament: Finance Minister Finance Minister Nirmala Sitharaman stated that the earlier Bill on cryptocurrency has been modified. 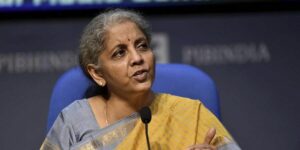 The Finance Minister remarked during Question Hour in the Rajya Sabha, “We are on the verge of introducing a bill in parliament. Once the law has been approved by the government, it will be introduced in the House.” According to Sitharaman, the new Bill is the result of rewriting an older bill that was unable to be submitted in earlier sessions of Parliament.

She also stated that the risk of cryptocurrency leading to illegal activity is being continuously monitored. “There was no decision made on whether or not its commercials should be banned. However, the RBI and SEBI are taking initiatives to raise awareness “she stated.

“Don’t have ready information regarding the amount of tax collected on cryptocurrencies,” Sitharaman stated in response to a question about the amount of taxes collected by the government on crypto trades. On November 29, Sitharaman stated that there is no proposal to recognize Bitcoin as a currency. In his written response, the Finance Minister also stated that the government does not collect data on Bitcoin transactions.

Bitcoin is a digital currency that enables people to purchase and sell goods and services without the involvement of banks, credit card companies, or other third parties.

The Cryptocurrency and Regulation of Official Digital Currency Bill, 2021, currently before Parliament in the Winter Session, aims to ban all private cryptocurrencies in India, but it makes exceptions to encourage the underlying technology of cryptocurrencies and their uses.

The Cryptocurrency and Regulation of Official Digital Currency Bill, 2021, is one of 26 new bills on the government’s legislative agenda, out of a total of 29. “To build a conducive framework for the creation of the official digital currency to be issued by the Reserve Bank of India,” the government said.

The Bill also aims to outlaw all private cryptocurrencies in India, with some exceptions to promote cryptocurrency’s underlying technology and applications.

“On crypto, we have serious concerns from the point of view of macroeconomic and financial stability. How the issue has to be dealt with – we have given our detailed suggestions to the government; as far as I know, the matter is under the active consideration of the government, and the government will decide,” RBI Governor had said at a media event.