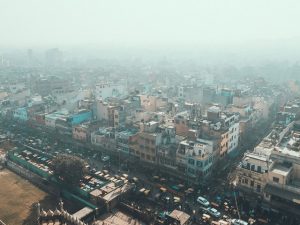 Pollution is a growing concern that adds a serious threat to the well-being of the planet. Artificial Intelligence might now be of substantial help in helping to deal with pollution. A method has been developed by the researchers at Duke University that uses machine learning, satellite imagery, and weather data. This will facilitate the autonomous discovery of air pollution hotspots, city block by city block.

The technique might prove to be a milestone in delving deeper into the reasons for pollution, thereby helping in the mitigation of the same. Because, when we know the reason, it is easier to fight it.

Adding artificial intelligence to the equation will widen the scope and potential, undoing the limitations and challenges posed by the traditional methods.

According to Mike Bergin (Professor of Civil and Environmental Engineering, Duke University)

“Before now, researchers trying to measure the distribution of air pollutants throughout a city would either try to use the limited number of existing monitors or drive sensors around a city in vehicles. But setting up sensor networks is time-consuming and costly, and the only thing that driving a sensor around really tells you is that roads are big sources of pollutants. Being able to find local hotspots of air pollution using satellite images is hugely advantageous.”

PM2.5 are the specific air pollutants Bergin and his colleagues are focusing on. These particles tend to have a serious and dramatic effect on human health owing to their ability to penetrate deep into the lungs. The particle is ranked fifth by the Global Disease study on its mortality risk factors list in 2015. The studies and reports indicate the life-threatening factor associated with the particle that is responsible for almost 4.2 million deaths in a year.

However, with the conventional methods, air quality monitoring was rather limited to a country-by-country level within the US. Though it is a valuable start-off point, it doesn’t offer a nuanced study into the details. The limitation means that the actual distribution of the particle in people is not available for study.

Previously, it was proven that machine learning, satellite imagery, and weather data could help in measuring the levels of PM2.5 on a small scale. By building on this potential, improvements have been made to the algorithm which is now capable of automatically finding hotspots and coolspots with a 300 metres resolution.

A technique called ‘residual learning’ was used to make this particualr advancement. After estimating the levels of PM2.5 alone, the algorithm measures these estimates and the actual PM2.5 levels. It then uses the satellite images for making better predictions.

An algorithm was then used by the researchers to look for city-block-sized pixels which tend to have higher or lower levels of PM2.5 than others. This algorithm was initially used for the adjustment of uneven illumination in an image to find areas with higher and lower levels of air pollution.

Though there is still space for improvement, the researchers are positive about the fact that the algorithm will be able to evolve with time and with the increase in the number of air quality sensors, the approach will be enhanced as well.