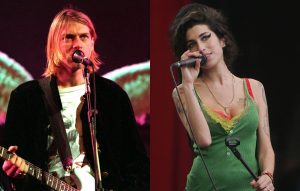 With its innovative and wonder-inducing ways of making the impossible, possible, it wouldn’t be an exaggeration if artificial intelligence is listed under miraculous human endeavors. Magenta, the AI program has now grabbed the spotlight by producing ‘new’ music by Nirvana, Amy Winehouse, Jimmy Hendrix, and The Doors. This is in connection with a project focused on raising awareness about mental health.

The project, quite futuristic and innovative was lead by Over The Bridge, a Toronto organization. It is basically a tasteful song compilation. All the songs in the compilation are from musicians who passed away at the age of 27, given the fitting name of “The 27 Club.”

Drowned In The Sun – Lost Tapes Of The 27 Club is the name of this ‘intelligent and masterful compilation, which will be used to throw light on the mental health issues and depression struggles the musicians battled with. It raises the crucial and yet often ignored question regarding mental health and how things would have been different if these much loved and talented musicians have the required mental health support. The compilation sharply points out the usual and seriously problematic tendency in the music industry to normalize and romanticize depression, often sugarcoating it by calling the music to be an example of authentic suffering.

The AI program composes the music in close similarity to the musicians by analyzing the artists’ previous works. The precise notes and harmonies and the inherent subtleties and nuances are studied by the program in order to ‘learn’ the factors that contributed to the unique and iconic tunes of the band and then tries to replicate these themes.

The program apparently went through a good amount of trouble while trying to analyze Kurt Cobain’s guitar playing style which is quite aggressive and free. The AI kept on giving a wall of distortion in place of his signature melodies.

The AI program was behind the creation of the track and lyrics. However, the vocals were sung by Eric Hogan, frontman of Atlanta’s ‘Nevermind: The Ultimate Tribute To Nirvana.’

Hogan expressed his surprise and agreement at the level of brilliance with which the artificial intelligence replicated the songs and even the vibe of the original tracks. The free and flowing style of Cobain was present in the compilation as well as the sentiment of the original songs which made them different and unique.

“Kurt would just sort of write whatever the hell he felt like writing. And if he liked it, then that was a Nirvana song. I can hear certain things in the arrangement like,’Ok, that’s the kind of an ‘In Ultero’ vibe right here or a ‘Nevermind’ vibe right here…..I really understood the AI of it.”

According to Over the Bridge, the aim behind the release of Lost Tapes of The 27 Club is to provide the necessary mental health support to those in the industry. Support services are offered by their website which also presents some concerning statistics about the potential suicide rates among musicians which is twice as more likely than those who are not in the industry.

Artificial Intelligence through this project has once again proved its potential to scale impossible mountains offering life-changing and at times ife-saving services to those in need.