Artificial Intelligence (AI) has been considered to be a vital tool which can be used for various purposes. Artificial Intelligence has proved to be helpful in quite a any situations when the human capabilities are limited. AI has been used in the medical field as well as engineering, it is capable to handle diverse amount of problems.

Adding up to all the things that Artificial Intelligence is capable of doing, rescue during floods can be added to the list. A group of researchers from Tohoku University has come up with a machine learning model which can identify accurately the flooded building within 24 hours of the disaster.

The machine learning model uses photos that are given out by the news media in order to identify the flooded buildings. This will be considered to be very helpful in the rescue missions as the involvement of Artificial Intelligence will be able to speed up the process to detect the buildings which are flooded immediately after a flood occurring on a large scale.  This will also allow the emergency rescue personnel to perform the rescue efficiently.

This research study was published in the journal Remote Sensing on April, 2021. Shunichi Koshimura of Tohoku University’s International Research Institute of Disaster Science who is the co author of this study said, “Our model demonstrates how the rapid reporting of news media can speed up and increase the accuracy of damage mapping activities, accelerating disaster relief and response decisions.”

This study also makes a very good use of the news media while developing this system. Since the news crews and the media usually arrive on the scene first in order to broadcast the images of the disaster for the viewers, the research team working on this study decided to incorporate this information in the machine learning process and the AI algorithms. 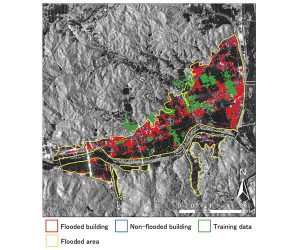 These algorithms are developed to classify objects with the help of image analysis. And for the Artificial Intelligence and the Machine Learning process to be accurate and effective, a lot of data is require to train these models, in this case, it’s the data about floods.

The difficulty faced over here is, one cannot simply use flood data from past events as the situation is different every time the calamity strikes. The situation and the damage done changes for each event. Thus on site data has the highest amount of reliability.

The application of the model was done at the Mabi-Cho, Kurashiki city in Okayama Prefecture. This area was affected by heavy rains across western Japan in the year 2018. The researchers started by identifying the photos which were given out by the press and then based on the landmarks and other clues which were apparent in the photo, they to geolocate them as accurately as possible.

They made use of the synthetic aperture radar (SAR) PALSAR-2 images provided by JAXA to discretize flooded and non-flooded conditions of unknown areas. One of the machine learning techniques, support vector machine (SVM), was employed in order to classify the buildings which were surrounded by the floodwaters and within non flooded areas.

Shunichi Koshimura speaking about the project said that, “The performance of our model resulted in an 80% estimation accuracy,”