In sharp contrast to the belief of his counterpart investors, Bill Miller has completely refuted the speculations arising in the market that digital currency Bitcoin is in a bubble and would collapse like 2013 and 2017. Several Nobel Price (economics) winners have said that the currency is in a bubble. Warren Buffet, one of the world’s richest man has been a fierce critique of cryptocurrency saying that it has zero value and he would never invest in it. He has called this year’s bubble a ‘mirage’.

On the other hand Bill Miller, the legendary investor has a completely different viewpoint of the whole situation. Not only he feels that bitcoin is not in a bubble but also he feels it’s the beginning of the digital currency mainstream transformation. In an interview given to the CNBC network yesterday, he quoted “Supply is growing 2% a year and demand is growing faster. That’s all you really need to know, and that means it’s going higher”. 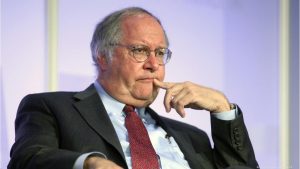 Miller has made a fortune in Bitcoin and completely trusts the behavior it exhibits. He invested first in Bitcoin in 2014 when one unit was priced around $350 and now when the price of the same has peaked around $65,000 he doesn’t shy away from investing more. During this time period, Bitcoin has risen and fallen in 2017, when it peaked at $20,000 and fell to lose about 80% of its value which it later gained in time. He believes that volatility is the price we pay for its performance and these sharp price swings will continue in the future.

Bitcoin has outperformed every government currency that has ever existed because of its decentralized nature and the fact that it trades in a free market completely dependent on demand and supply which has made it establish its own economy. Once looked at with a doubtful eye Bitcoin today is accepted as means of payment by major companies like Microsoft, Tesla, and Burger King.

Many people including eight Nobel prize winners have called the currency a fraud due to its supposedly unpredictable nature but what they have failed to see that embedded in the data of movement is a behavior of Bitcoin that it exhibits without a shift in pattern. A new currency whose market is just over a decade old has been in a bubble thrice after an exact period of four years in 2013, 2017, and now again in 2021. Three bubbles exactly four years apart wouldn’t suggest fraud but a pattern that could be due to the way the currency has been programmed. An analysis of this scientific currency using statistical tools could be used to predict its value and fluctuations in it which would allow people to make smart investments and plan accordingly.

The price of Bitcoin has exhibited some kind of volatility with high and lows throughout its life in the market but these fluctuations have been promoted by dubious trading of inexperienced traders who have failed to see a pattern in the behavior of the cryptocurrency and have repeated their trading habits.

Industrialists like Elon Musk have classified the behavior of cryptocurrency as ‘volatile but predictable’ and investors like Bill Miller have called it ‘Digital gold’, saying it’s more precious than gold as it can be carried easily and can change hand within an instant with a touch on cellphones.