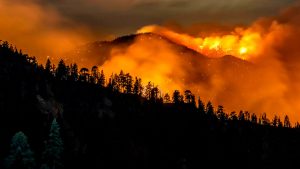 In the recent years Artificial Intelligence (AI) is proven to be one of the greatest invention of the mankind. Whether helping the machines learn or smart technology, AI has a big role to play in this. AI has also proved to be a valuable tool in medical field and in boosting agriculture.

To simply explain what Artificial Intelligence (AI) is, it is the thinking and intelligence ability demonstrated by the machines in order to think like humans and mimic their actions. This might also include a machines problem solving ability or learning ability. It also makes machines able to learn from previous experiences.

Artificial Intelligence (AI) can now prove to be a valuable asset in tackling wild fire problem. Sonoma County in California is all set to employ cameras capable of spotting fires equipped with a software that can detect wildfire activity and then proceeds to alert authorities.

This has been implemented with an agreement with the South Korean firm Alchera. This system works by comparing the past and the present images of a patch of land. It then looks for certain specific phenomenon such as flames burning in the darkness or smoke. This helps them to detect or look for the signs for fire.

Chris Godley, the county’s Director of Emergency Management said, “This is really cutting-edge work, to bring this capability into the hands of local first responders. It’s going to take us awhile to make sure we get the bugs out, as it were, and that we really can depend on it because ultimately this is a lifesaving mission.”

Initially the emergency workers will have to teach this AI system how to differentiate between the images. They are expected to get confused between those who show smoke from fire and the ones showing clouds or fog and vapor from geothermal geysers. The system will also collect feedback from humans and eventually will be capable of detecting fires on its own.

This system is expected to be useful at night. Especially when there will no or less number of bystanders who might notice the fire or the signs such as smoke and then alert the authorities about it. This can also be implemented in remote areas where not many people visit often but has dense vegetation.

The County decided to take this measure after the disastrous forest fires of 2017. These fires resulted in 22 people getting killed and more than 5000 houses being destroyed. This system has been proving to be extremely helpful to the local firefighters. They now are able to determine the exact location of the fire, where exactly it is heading, how quickly it’s spreading and what the wind conditions of that place are. This information is vital as it helps the crew to determine which are the areas that need to be evacuated.

Alchera has a lot of experience in tackling the wildfire problem. Previously they have assisted with the wildfire problem in Australia. The cameras can also be utilized to check the water levels or flooding conditions in the nearby river areas and also to keep a check on the road conditions.

Chris Godley says, “This is not just to support firefighters but also, critically, it’s to help us educate and inform our warning efforts.”