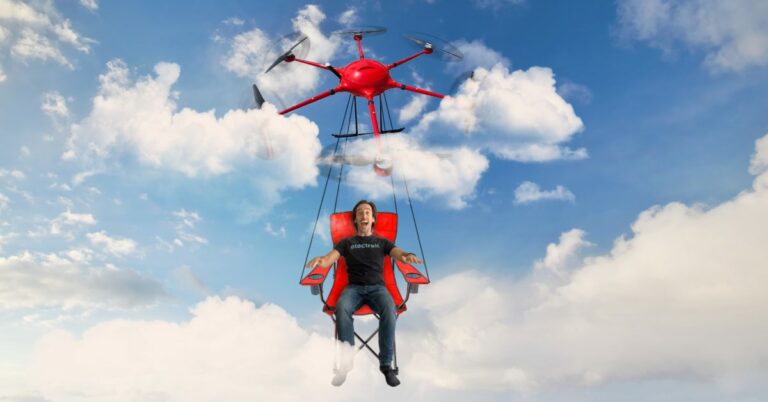 Alibaba products from EVs to drones include various types from single-seater cars to four-seater bikes. But this strange EV drone by Alibaba came into the limelight recently, which can carry passengers. It is a heavy lift drone, with six electric motors and costs around $10,ooo. The helicopter’s size is about 175 cm (5’8″) and has four 6s 32,000 mAh batteries inside.

The four batteries add up to2.84 kWh of stored energy, meaning it could be the size of a light electric dirt bike’s battery. Which is actually capable of carrying a human.  Technically it isn’t a drone that is designed for human lifting, but the drone is capable of lifting the weight of a person. Hypothetically it is possible that passengers can travel through this, keeping aside the safety and other constraints. Adding a rope and a chair to just any drone wouldn’t take humans off to other places. It is only the heavy-duty drone that can do this job.

A human or an object that is up to 60kgs(132 lbs) of weight can be carried through this drone. This means not everyone can travel through this. Regardless, the drone is considered one of a kind, especially as a passenger (who is weighing below 60kgs) can travel at 75 km/hr with this drone.

Dangerous to try in real life

While it does sound fun, it is not suggestible to try it out by an individual just like that. Either some precautionary measures are being taken, or some professional assistance is nearby, then the drone can actually be used to carry humans. For menial things like cleaning a ceiling fan, or something that’s stuck above, this drone could be ideal use. There are times when using a ladder or long stick to get objects on the roof can be difficult. If there is a person weighing below 60kgs nearby, they can be of much help in the presence of the heavy-duty drone by Alibaba.

There could be a question, why call it a drone that can carry passengers, when people can’t actually use it? Isn’t it “cool” that a drone can actually perform the task? The capabilities of the drone are highlighted. Maybe sometime in the future, there would be a possibility of taking human passengers in such an easy manner without any hassle. Which would include all safety measures in case of an emergency landing. Such features are not available for a simple heavy-duty drone yet.