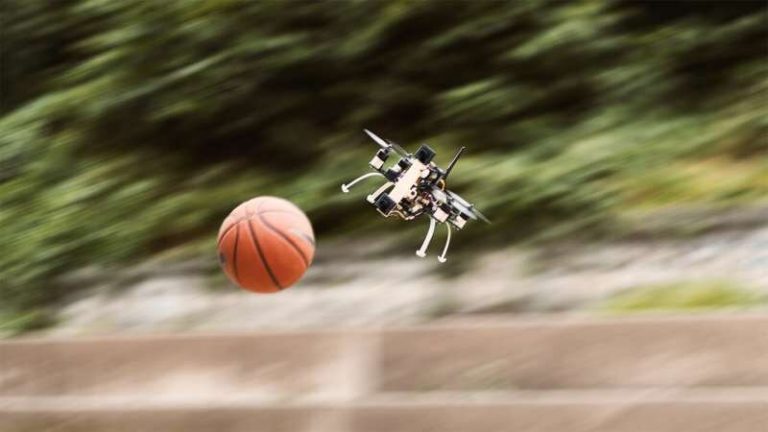 Unmanned Aerial Vehicles (UAV) or drones are used to carry out a number of tasks. They are widely used for aerial photography, mapping purposes, search and rescue operations, agricultural, shipping, law enforcement and many other things. Drones can get many things done but have certain limitations.

When a drone is moving quickly, avoiding any obstacles in the way can be very difficult. Most drones and many other flying robots are equipped with cameras capable of detecting obstacles, it usually takes drone 20 to 40 milliseconds to process an image and react to it.

In any other circumstances this might seem like a small amount of time but when a drone is flying at a high speed, this amount of time is inadequate to avoid crashing into another drone or a bird or any other obstacle for that matter. This can be a major problem when drones are used in unpredictable situations or when there are many drones flying in the area.

In order to address this problem researchers at the University of Zurich have now developed a new flying robot capable of detecting and avoiding any fast moving objects. This could be a huge step towards developing drones capable of flying faster under harsh conditions. The details about this study are published in ‘Science Robotics’.

Davide Scaramuzza, who is leading the Robotics and Perception Group at the University of Zurich and also the NCCR Robotics Search and Rescue Grand Challenge said, “For search and rescue applications, such as after an earthquake, time is very critical, so we need drones that can navigate as fast as possible in order to accomplish more within their limited battery life.”

They also added that, “However, by navigating fast drones are also more exposed to the risk of colliding with obstacles, and even more if these are moving. We realized that a novel type of camera, called Event Camera, are a perfect fit for this purpose.”

The researchers equipped a drone with four propellers also known as quadcopter with special cameras and algorithms that helped it to reduce reaction time to a few milliseconds which is sufficient to avoid a ball thrown at it. This makes the robot an ideal substitute to be used in situations such as natural disasters.

Davide Scaramuzza said, “One day drones will be used for a large variety of applications, such as delivery of goods, transportation of people, aerial filmography and, of course, search and rescue.”

While adding to that they said, “But enabling robots to perceive and make decision faster can be a game changer for also for other domains where reliably detecting incoming obstacles plays a crucial role, such as automotive, good delivery, transportation, mining, and remote inspection with robots.”

In order to test the cameras and the algorithm the team threw objects of different shapes and sizes towards the camera to measure the efficiency of the algorithm in detecting them. The success rate was anywhere between 81 to 97 percent depending on the size and distance of the object thrown.

Then the cameras were mounted on a drone for testing. The drone was flown in both indoor and outdoor environments and was able to avoid objects, such as a ball thrown at it from a three meter distance at 10 meter per second. The drone could avoid it more than 90 percent of the time. For further developments, the researchers are aiming to test this system on an even more agile quadrotor.