All brands halted from Twitter says Volkswagen  WirtschaftsWoche had earlier reported that Audi had discontinued all activities on the social media platform.

After the acquisition of Twitter by Elon Musk, many celebrities and advertisers have halted the platform. Another such brand that halted all paid activities in the platform is the luxury automobile company – Volkswagen.

A spokesperson said on behalf of the brand that Volkswagen has paused advertising on Twitter until further notice on Wednesday. Earlier this month, Volkswagen, which holds Audi together with the VW, Seat, Cupra, Lamborghini, Bentley, Ducati, and Porsche, said it had advised the brands to halt paid advertising on Twitter until further announcement following Elon Musk’s takeover of the platform.

All the brands had followed the guidance to pause advertising, while Audi had decided to halt organic activities that include direct posts, and only respond to queries from customers on the website.

WirtschaftsWoche had earlier reported that Audi had discontinued all activities on the social media platform.

“We are monitoring the situation closely and will decide on the next steps depending on developments,” an Audi spokesperson added in an emailed statement to Reuters.

Audi, which used to tweet almost every day, has not tweeted anything since 1 November after Elon took over the platform in late October.

Many celebrities and brands have already halted their accounts and advertising on platforms in search of an alternative platform like Twitter.

Twitter has been busy trimming down its workforce lately. Hundreds of employees have already lost their job profiles.

Volkswagen is a motor vehicle manufacturing company based in German. Its headquarters is situated at Wolfsburg, Lower Saxony, Germany. The company was founded by the German Labour Front on 28 May 1937 in Berlin. The parent organization of the company is Volkswagen Group.

The Volkswagen Group owns around 10 brands such as Volkswagen, Volkswagen Commercial Vehicles, Skoda, Seat, Cupra, Audi, Lamborghini, Bentley, Porsche, and Ducati. The Group’s net income as of 2021 is €15.428 billion and its total assets of around €528.609 billion in 2021. It is the largest automaker for 14 years in a row. The second largest automaker is the Japanese brand Toyota. Currently, its stock price is around €137.14 as of 23 Nov 5:37 pm. 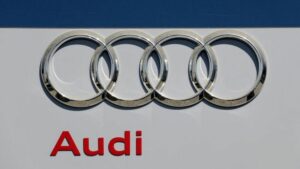 Audi AG which is known as Audi is another German auto manufacturing company of luxury vehicles. Its headquarters are in Ingolstadt, Bavaria, Germany. It was founded by August Horch on 16 July 1909 in Zwickau, Germany. The current CEO of the company is Markus Duesmann.