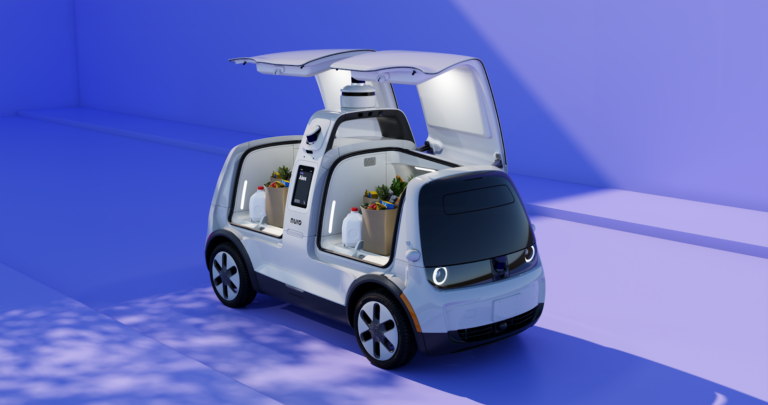 Nuro unveils a new autonomous delivery bot that has more features than the earlier version. It has twice the cargo volume than earlier and has customizable storage and temperature-controlled compartments. Items in the cargo can be kept in cool or warm conditions as per the need. Additionally, the vehicle is designed to handle any kinds of toils one might expect a delivery vehicle to endure. It could be weather conditions, human abuse, or long hours on road, everything can be handled by the vehicle.

Since 2016, when Dave Ferguson and Jiajun Zhu founded Nuro they have raised $2.13 billion. Now, they unveil a third-generation autonomous delivery bot that is specifically designed for commercial operations and manufactured. The vehicle is being developed in partnership with BYD North America.

While the other vehicles unveiled earlier were named R1 and R2, this new model is going to be called Nuro. Introducing the robot to the masses and a name that illustrates the flagship model. It is not just meant to be a sideway delivery bot but is designed for the road. There are other safety features added to the delivery bot. If any pedestrian or cyclists were to encounter the vehicle there will be an airbag to reduce the damage. Furthermore, it has cameras, radar, lidar, and thermal cameras which get the view of the vehicle 360-degree view.

To know how the company came up with the vehicle details, it would be interesting to know the earlier model developments. Initially, the company started by using modified Toyota Prius sedans. These vehicles were used for testing purposes for pilot grocery deliveries in Arizona and Texas. The company transitioned in December 2018 to the R1, its first step toward a vehicle designed exclusively for packages.

Later in 2020 the R2, a second-generation vehicle was introduced which was designed and assembled in the U.S. in partnership with Michigan-based Roush Enterprises. With this model, they have a 360-degree view of the vehicle. Having lidars, cameras, and radars as well. However, it was known that it was missing certain requirements that are required according to the U.S. Department of Transportation’s National Highway Traffic Safety Administration. Now, after working with the regulators for three years(since the first model), the company receives an exception for launching the R2 into the market. The company can legally operate in California as they receive all approvals that are required.