Amazon reportedly spent $4.3 million on anti-union consultants in 2021 Some were revealed to have been paid around $3,200 per day. 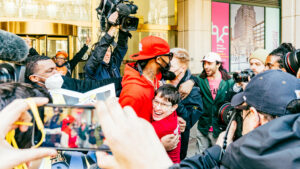 According to reports, Amazon.com Inc. paid approximately $4.3 million to consultants in the year 2021. This was towards pushing to prevent the unionisation of its warehouses around the country. The retail company’s filings, which are currently with the US Department of Labour, revealed these details. Employees were instructed to attend these meetings hosted by consultants in the field. They mostly discussed anti-union talking points ahead of the crucial union votes which took place in Staten Island, New York and Bessemer, Alabama.

Any company is generally required to reveal financial details in the event of such consultants directly talking to the workers about topics like unionisation. Hardly any of these companies have even spent close to $1 million on the issue of union avoidance. However, a recent report specified how Amazon spent way more than that simply last year itself. Moreover, certain consultants were reportedly paid a maximum of $3,200 each day.

Such meetings are legal in all aspects and are mostly held when employers came across potential organisation of unions. Labour organisers refer to these gatherings as “captive audience meetings” owing to the attendance being generally non-optional. In most cases, these consultants focus on union dues and possible loss of wages caused by the halt of everyday work. Essentially, they aid the retail giant’s putting forward of plans to crush workers’ unions.

Workers in Bessemer told reporters last year that they “encountered consultants every week, and at one point just about every day.”

Employees at the Bessemer warehouse in Alabama were needed to attend meetings being held frequently. In these meetings, they witnessed anti-union discussions from consultants in the build up to a union election in early 2021. Ultimately, the workers voted against taking part in the unions of Wholesale, Retail and Department Stores. However, federal officials went on to order another election after concluding that Amazon broke the law.

Consultants had a similar role in a warehouse at Staten Island, New York. This is where employees initiated the organisation of a drive with the Amazon Labour Union. The workers successfully voted to form the first US union at Amazon this week.

Turns out, the money the retail giant spent on anti-union consultants is just a part of its total expenditure on union avoidance efforts. Many suspect that Amazon spent such an amount on these consultants due to the large size of their workplaces. The company was determined to get the anti-union message through to every worker possible.