Amazon is set to open a $21 million state-of-the-art warehousing facility in Tijuana, Mexico, which will apparently abut a housing settlement along the Tijuana River, which is located quite close to the US-Mexico border.

Images of the new warehouse have been doing the rounds on social media, complete with the giant blue logo of the online retail giant that people are familiar with. At the same time though, its background is not in agreement with its shiny new look, owing to the unpaved roads and houses with cardboard roofs. So, it’s not really surprising that the pictures are drawing multiple comparisons to science fiction. 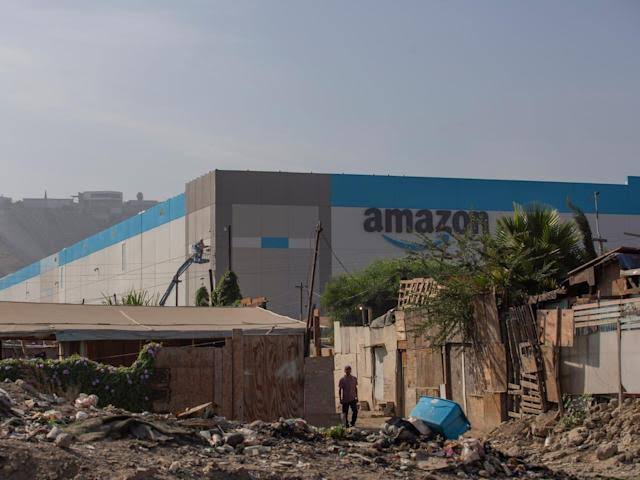 Amazon spokesperson Marisa Vano has said that since the company came to Mexico, they have managed to create over 15,000 jobs across the country, providing new employment opportunities with competitive salaries, along with additional benefits to employees. This, the firm believes, is helping bolster the support to local communities, allowing the areas to grow.

This comes as the latest move Amazon has made to consolidate its presence in Mexico and Latin America, over the past few years. Mexican news outlet Proceso has said that Tijuana’s mayor holds that the warehouse will be the key to faster delivery times for Amazon goods within the city as well as its neighbors.

Spokesperson Vane, meanwhile, adds that the new warehouse will set up 250 new positions, which will be available to the local community. The company says that with Tijuana being “one of the most important cities” in Northern Mexico, its presence in the neighborhood will allow for the generation of “hundreds of jobs,” which will be beneficial to both, Amazon’s customers, as well as the local community.

This however, doesn’t hide the fact that Thomson Reuters has reported subcontracted labor at Amazon’s Mexico warehouses, which apparently result in forced overtime, and frequent layoffs without any severance being paid. Nevertheless, the city of Tijuana is typically more expensive than the remainder of Mexico, owing to its close proximity to the United States. Minimum wages stand at nearly $10.70 USD per day, which is higher than in other cities. Mexico doesn’t have any unions associated with any of its nine Amazon warehouses.

It remains to be seen what effect the upcoming warehouse will have on the local community, and if Amazon’s claims will prove to be true in the long run.