Hello, developer’s community! Years are passing by and more and more new stuff appears in the development marketplace. Being a good developer means that you always have to keep up with the world of coding in order not to miss new important updates. In other words, a developer has to move himself on, so that he can always stay a trendy specialist.

A lot has changed during the first half of 2020. Still what remains the same, is an eternal battle between Angular and React. Before we move to the comparison and find out which one is better Angular Or React in 2020, let me make it clear the point about most common React and Angular Interview Questions.

Angular is powered by Google and was first released in 2010. It is an outstanding front-end development framework. It has a good structure, own ecosystem, strict rules and declarative code style. Besides, the learning curve is deep and rather difficult, but after you possess all of the Angular’s possibilities, you will find out how thrilling the process of creating your project may be.

The main model of Angular is based on MVC architecture, which stands for model-view-controller. MVC is commonly used for developing modern user interfaces. It provides developers with the fundamental pieces that are needed for designing mobile as well as web applications.

React came into existence in 2011 and is the child of Facebook. It is a front-end library that gives you the opportunity to build an excellent UI. React is easy for reading, writing as well as for integrating with other JavaScript frameworks.

What is important to know is that React is a place where you can use not only your developer’s logic, but imagination as well. It has a flexible development environment, that’s why a developer should widen his or her horizons of thinking.

React is aimed at expanding complex interactive user interfaces mostly in web and mobile applications for Android and iOS.

Angular’s template language is TypeScript by Microsoft. It is suitable when you develop some complicated applications and don’t want to waste your time on catching bugs, because TypeScript helps to catch and prevent them earlier.

React is written in JavaScript. It can be used in many different kinds of applications because of support in other languages and possibility to integrate with them.

Angular works slower than React, but still considering the fact that it includes all stages from creating a project to the optimisation of the code, the speed is satisfying.

React is fast because of the way it is designed. The speed of React adds efficiency and simplicity to the application development.

Now, when we’re done with the most important interview questions, let’s figure out which one, React or Angular, is the most in-demand front-end development framework in 2020.

Which one to choose to be an in-demand developer?

Angular is a complete package that offers you all the tools right from development to testing an application, while React is a flexible library that requires the support of other libraries for the better possibilities for development.

Choose Angular when you need:

Choose React when you need:

And yet I won’t base my conclusion only on the richness of the functionality and other features of both frameworks. In order to make the right comparison, I’ll appeal to the 2020 statistics of NPM Trends and Stack Overflow Trends.

NPM stands for Node Package Manager and currently, it has the richest open source library in the world.

Founded in 2008, Stack Overflow is the largest, most trusted online community for anyone who learns to code, wants to share their knowledge and build their careers. More than 50 million unique visitors come to Stack Overflow each month to provide help by solving coding problems, developing new skills, and finding job opportunities.

On these websites developers can search for the statistics about any framework, templates, programming languages etc. 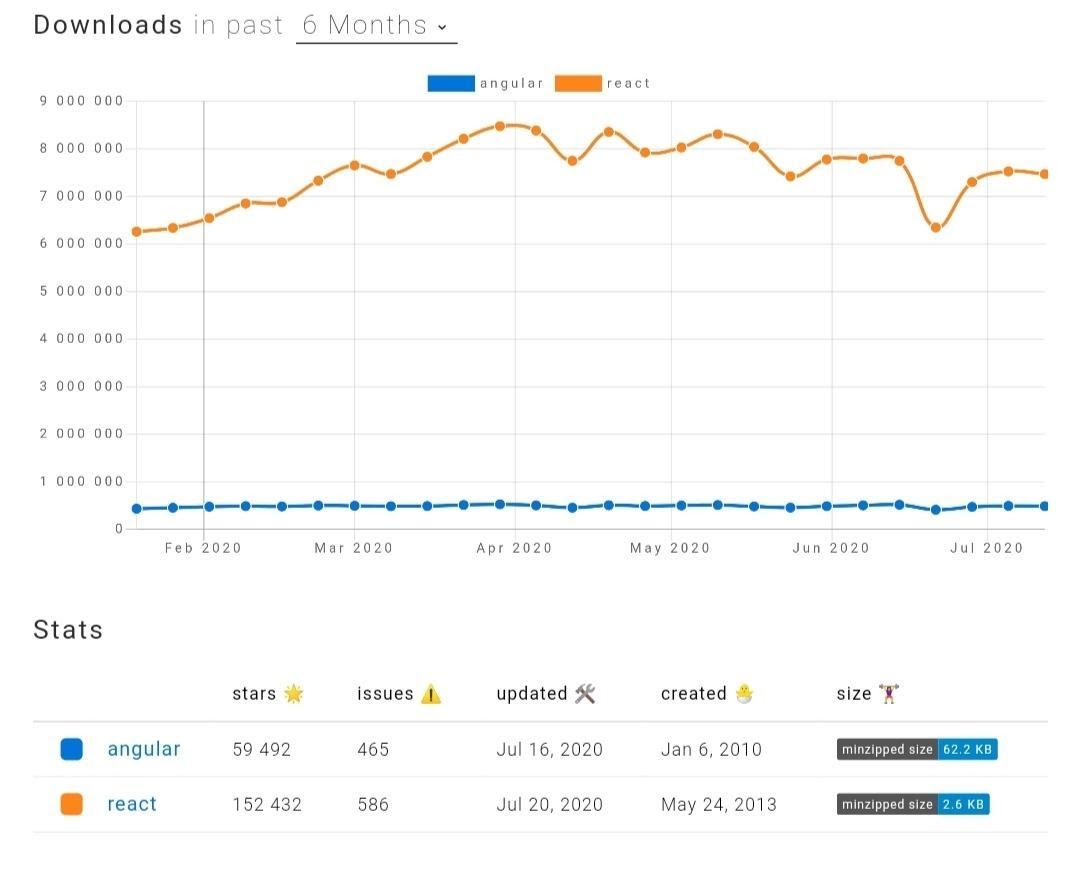 According to NPM Trends it is clear that React is much more popular in 2020 among developer’s society. More than eight million downloads during April, May and June. Such numbers can really drive crazy.

In the meantime, Angular was downloaded by 500,000 people and this number is rather stable within the first half of the current year. 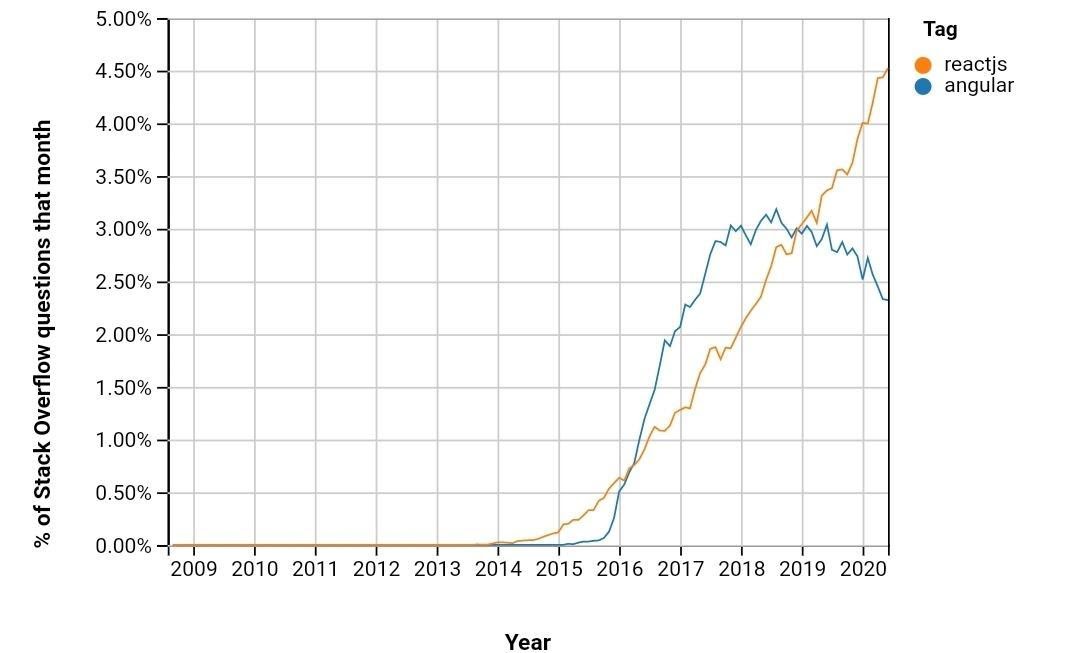 Stack Overflow Trends gives a quite another view on the situation. From 2014 to 2019 both React and Angular had almost equal popularity, but then React has become an obvious leader in this race.

So, statistics showed the results: the most in-demand front-end development framework in 2020 is React. Still your choice must depend only on your inner feelings while working and on your experience.

Thank you for being interested in this topic. Come back for more and stay safe!