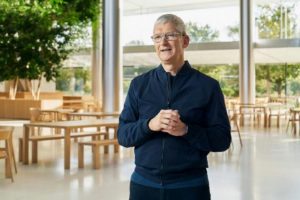 In a podcast interview with the New York Times on Monday, Apple CEO, Tim Cook engaged in a discussion about groundbreaking technologies as well as his future plans concerning his career. According to the Apple CEO, augmented reality and artificial intelligence are supposedly the key to the company’s future.

Although he demurred from providing specific details concerning the company’s product initiatives especially those like AR glasses which are highly anticipated and held in high hopes, he did give a peep into his thoughts and perspectives regarding these topics.

It is expected that the tech giant will launch the AR glasses by next year, however, a fully autonomous electric vehicle is still out of the picture as of now.

Cook talked in detail about the promise and scope held by augmented reality and how it can prove to be an absolute tide-turner. Virtual conversations would be enhanced and made more effective with the help of augmented reality, adding the quality of discussions. He even went onto state an example of how the interview could have been enriched with the use of augmented reality, which would let him display charts or other images, making the discussion more productive and meaningful.

He went on to express his perspectives regarding the benefits that could be reaped by different business fields by leveraging augmented reality particularly, education, gaming, health care, and retail industries.

“I’m already seeing AR take off in some of these areas with the use of the phone. And I think the promise is even greater in the future.”

As the conversation turned in the direction of self-driving cars, Cook went on to state how the company is interested in “autonomy itself.” By autonomy, he was implying the software and hardware that enables the free movement of robots, cars, and drones without the requirement for human instructors. He explained that it is important to note that self-driving cars are basically robots. This is remarkable since the same autonomous technology is not just limited to cars and could be harnessed for various other products.

He deterred from commenting on the company’s plans regarding the production of a self-driving car. Although he did mention, “We love to integrate hardware, software, and services and find the intersection points of those, because we think that’s where the magic occurs.”

Cook also divulged details about his future career plans and retirement from the position. The CEO, who is 60, stated that he is unlikely to hold the position in the next 10 years.

“And the date’s not in sight. But 10 more years is a long time and probably not 10 more years. And so I don’t think I will know that until after I am not here. Because I think I’ll run so fast that I’ll never really think about it until I’m not running anymore.”