Sophia, the humanoid robot might soon get a sibling

Sophia, the first humanoid robot developed by Hanson Robotics had created quite a wave of wonder and wave in the technological landscape. Sophia was supposedly a personification of the dreams and hopes held for the future, curated by advancements in artificial intelligence. 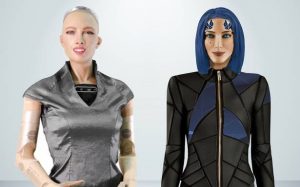 To date, the label of the most advanced human-like robot rests in the hands of the humanoid robot, Sophia developed by Hanson Robotics. A creative and intelligent blend of science, artistry, and engineering, Sophia has been in the spotlight for her sci-fi-like features opening a platform for the advancements in the field of artificial intelligence and machine learning. Being a first in many grounds, Sophia has captured global attention and perhaps, a celebrity status through the appearance in shows like Good Morning Britain and Tonight Show. The humanoid also has to its credit hundred of conferences where she presided as the speaker.

The Next In Line

Now, five years after Sophia was introduced to the world, Hanson Robotics is already sharpening its tool kit for developing a sibling for Sophia, named Joyce.

The company is working in collaboration with a Canada-based AI company named Immervision for developing Joyce’s body. A visual cortex with three ultra-wide-angle panomorph cameras will be built into the humanoid. Data-in-picture technology and multiple sensors will be used by the humanoid. This will help in providing data to its AI and neural networks, and also to the computer vision which will substantially enhance the visual perception.

It is expected that the collaboration between the two companies will result in the evolution of machine perception which in turn will help in the development of human-like vision. Though the companies deterred from giving a solid timeline for the project, it is held in high hopes and expectations.

Immervision is also on the lookout for new members to collaborate on the project. Developers, universities and tech companies are being provided with development kits that help in enhancing the capabilities of the humanoid through the addition of sensors, software, and AI algorithm.