This week, Apple Inc, announced to have dropped its in-store mask mandate. They are planning to do away with the requirement for mask at most of their retail stores in the United States. The iPhone maker came forward to take this decision to remove the mandate owing to the reduced number of Covid-19 cases. They are also planning to gear up for resumption of in-store classes, Today at Apple.

The tech company announced the updated news this week to the concerned employees working at eligible stores They have also made a statement on its websites updating which locations are doing away with the mask mandate. However, Apple Inc. still recommends wearing of masks to its customers for precautions. The staff would readily provide masks to any customer who would require it. Employees clarified that the retail workers would have to continue wearing masks. 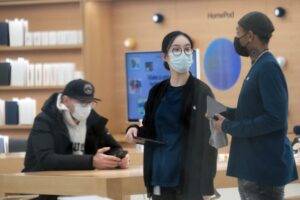 The stores in the particular states where the update in mask policy applies are Kansas, Kentucky, Georgia, North Carolina and Ohio. Some newer updates apply to states which had a slightly different mandate, such as Hawaii. Apple stores in Hawaii require their customers to wear masks at all times.The locations in New York ruled out that every customer, fully vaccinated can opt out from wearing masks.

Though reporters approached Apple representatives for a comment, none of the spokespeople responded to the request. Nonetheless, reporters are assuming this update to be official for many retail stores in the US are taking a similar step.

Other developments regarding the mask mandate:

California-based tech giant, The Cupertino is also reportedly planning the return of in-store classes in several spots across the country. These in-store classes are known to offer tips on how to use the firm’s devices and software. These classes have been an upcoming addition to the retail stores of tech giants like Apple.

Apple is rumoured to be set for new launches in the first half of 2022. They are planning to launch new models such as the new Mac, iPad Air and iPhone SE in March.

During the course of the pandemic, Apple had visibly updated its mask rules and classes in-store accordingly. Since 2020, it has repeatedly adjusted their mandate depending on the situation of Covid-19. Previously, they had done away with requirement for mask in November 2021, but had to resume it in a few weeks due to the spread of the new wave of the Omicron variant. Presently, Apple has still not made in announcement for corporate employees, who are still working from home.