Undoubtedly, one would consider this a time of rapid resignations and a stringent labour market. Some companies did not have the means to aid their workers. However, the ones that did, contributed towards reviewing and increasing their workers’ benefits. Apple, world’s most valuable company, is bound to be one of these.

The reason behind the change:

According to a report published by Bloomberg last week, Apple Inc. introduced a series of initiatives. This would be towards the advantage of its retail workers. The source informed that the tech company would provide pay raises ranging from 2% to 10% for its retail workers in the United States.

Not all employees, but some hourly employees, salespeople and Genius Bar tech support staff would be recipients of the raise. Apple had only started informing stores and certain employees of the news. Clearly, not every worker part of the scheme had been notified by then.

Moreover, these bumps in payments are a separate entity altogether. They will be put into effect irrespective of Apple’s Annual wage revisions and increases, held in October. These are to be initiated from the month of February itself. 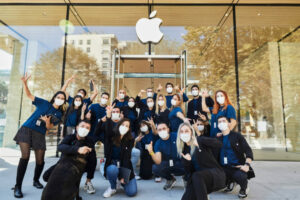 Assuming to be true, we can say that these efforts by Apple are another proof of the company’s regard for the shifting nature of the company. Clearly, the company hears and respects the complaints made by its retail staff. This is an important step, for US alone has 270 Apple retail outlets.

The sources who were familiar with the matter stated that the increase in wage was keeping in mind the satisfaction of the workers. Various workers of companies in the US were seen to showcase their dissatisfaction during the pandemic.

In order to avoid such negativity, Apple introduced these wage raises. They targeted it towards the employees who had been working at the stores before the pandemic (2020). Moreover, this was done to maintain equality between senior and newer staffers.

Though Apple is yet to comment on the news, they guaranteed more benefit offers to full-time and part-time employees in retail. The company confirmed the news to all retail outlets.

The benefits would include 50% more sick days for workers and an increase in the number of annual vacation days. Part-time employees would also enjoy up to six paid vacation days and six weeks paid parental leaves.

These changes mark the crucial step made by Apple Inc. to keep the interests of their retail workers in mind. This would aid towards better productivity and service for Apple customers as well.