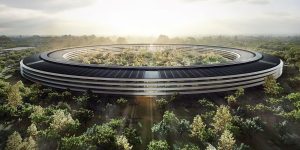 An announcement was made by the tech giant Apple on Monday concerning an investment expansion in its US operations. The company will expand an investment amounting to $340 billion in its US operations. This is in addition to Apple’s plans to create 20,000 new jobs in the course of the next five years. The Cupertino tech giant is planning to spend over $1 billion towards the building of a new campus and engineering hub in the Research Triangle area in North Carolina.

Apple expects the North Carolina investment to facilitate the creation of over 3000 new jobs particularly in the field of machine learning, artificial intelligence, software engineering, etc.

As per the reports, North Carolina will also receive funding of $100 million which will be channeled towards supporting schools and community initiatives, particularly in the greater Raleigh-Durham area. This is in addition to funding of $110 million for infrastructure spending spread across 80 North Carolina counties which are in need of financial support and backing. The funds for infrastructure will be distributed across broadband, roads and bridges, and public schools.

Apple also mentioned that its plans to extend carbon-neutral ambitions are still strong, in the wake of its expanding US footprint. The expansion will include manufacturing supply chain, and product life cycle in addition to its own operations.

According to Tim Cook,

“At this moment of recovery and rebuilding, Apple is doubling down on our commitment to US innovation and manufacturing with a generational investment reaching communities across all 50 states. We are creating jobs in cutting-edge fields – from 5G to silicon engineering to artificial intelligence – investing in the next generation of innovative new businesses, and in all our work, building toward a greener and more equitable future.”