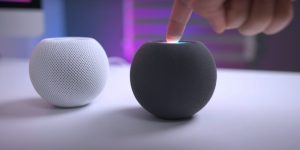 Apple had a slight slip of tongue or rather a slip of fingers where they mentioned the term “HomeOS” in a job posting but then quickly changed it. Now, with the WWDC 21 so close up ahead we can’t help but anticipate a new, more exciting and incorporated operating system for Apple’s home products. The Worldwide Developers Conference is the heaven on Earth for technology enthusiasts and several companies introduce new inventions on this platform. Apple is expected to unveil the new updates for iOS 15 and macOS 12.

A twitter user and developer Javier Lacort discovered the job posting which mentioned HomeOS twice. The job was for a senior iOS engineer working on Apple Music. Lacort posted a screenshot of the job posting on Twitter and that is where the news gained traction.

Now this could possibly just be a typing mistake or an informal term which is used in the Apple offices for the regular software but somehow slipped out in a tweet by mistake. The more interesting take would be that Apple is bringing a whole another home appliances and gadgets line to the market. Apple already has Homepods, Apple TV, Ipads, and Macs other than the iPhones. We all know that when Apple launches a new product the marketing strategy is not just targeted at a single product but on the Apple ecosystem as a whole. Some other company might best Apple’s single product in that particular niche or genre of technology but no one has been able to beat the whole ecosystem that Apple offers.

Imagine an integrated and unified operating system for all your Apple products. The “HomeOS” might just be that! All your devices which are placed in your house will be seamlessly connected as one. This might sound a little far-fetched but it is possible. Other than that a “HomeOS” could just be a legitimate name for the software used in the Homepods or a just a new name for any old software which Apple has.

We do not know what “HomeOS” is just yet but we are extremely sure that a small error in an inconsequential tweet has captured the attention of almost every tech savvy person in the whole world.