Wozniak V. YouTube Is the platform responsible for the creator using it? 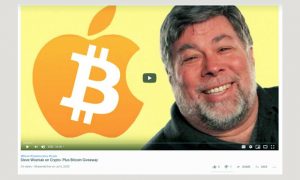 Well who thought that a technological rivalry between two Tech Giants would get this personal? It’s a good thing then that it’s not like that. Steve Wozniak recently filed a case against YouTube for the false use of his identity. YouTube however was not the one using his identity. It was “A” channel on YouTube.

Steve Wozniak is the co-founder of Apple. He’s a tech genius who helped Steve Jobs build Apple into the biggest largely available tech advancement known to the modern world.

Wozniak filed a case against YouTube because a channel on YouTube used his face for the purpose of a potential bitcoin scam. The YouTube video mentioned that Steve Wozniak amongst other notable personalities was doing a free bitcoin giveaway. It said that those who donated any amount of bitcoins would get the double of it back. The other notable personalities whose names and images were misused in this video included Bill Gates, the founder of the Microsoft Corporation and Elon Musk, founder of Tesla Inc. and SpaceX.

All of these men were used as false hosts for that video in order lure in bitcoins and get away with the scam. Wozniak found out about this and filed a case.

The case Wozniak V. YouTube LLC, 20CV370338, California Superior Court, Santa Clara (San Jose) did not however end in Wozniak’s favor. Wozniak lost the case. The judge stated that the company which provided the platform for creators was shielded from the responsibility for the content created by the users under Section 230. Wozniak’s defense was good but not good enough. He made the point that Section 230 of the Communication Decency Act should not apply here because YouTube actively took part in promoting the content through its directed advertisements and did not remove the “fraudulent content” as it should have. YouTube also falsely verified the channel.

YouTube is largest platform where people can create and post content for free. If YouTube is held accountable for any and all content then the equation will get severely disturbed. Wozniak would have won the law suit if he directly targeted the content creators of the channel in question. False use of someone’s identity is a crime and that would’ve been an easier case to win.

The court said that Wozniak had solid ground but not solid enough to overcome the immunities provided to YouTube LLC by Section 230. Wozniak has been given 30 days to reframe and revise his complaint.