Cathie Wood’s Ark Investment Management is the most recent financial institution to file for a bitcoin exchange-traded fund (ETF). Under the ticker ARKA, the ARK 21Shares Bitcoin Futures Strategy ETF intends to invest in Bitcoin futures. However, the Securities and Exchange Commission has yet to approve one, even though more than 20 have previously been registered.

According to a filing with the Securities and Exchange Commission on Wednesday, the ARK 21Shares Bitcoin Futures Strategy ETF, ticker ARKA, intends to invest in Bitcoin futures contracts that trade on commodities exchanges.

The filing was submitted by Alpha Architect, a white-label ETF issuer, with 21Shares US LLC, a subsidiary of Zug, Switzerland-based 21Shares AG, designated as the sub-adviser. Ark Investment Management has agreed to assist the sub-adviser with marketing.

After SEC Chairman Gary Gensler stated he might be more receptive to approving one submitted under the Investment Company Act of 1940, which provides better investor protection, ETF issuers have been scrambling to submit applications for funds tracking Bitcoin futures.

Nine Bitcoin futures ETF applications were being evaluated by US authorities at the start of the month according to Bloomberg Intelligence.

There are “strong” indications that a Bitcoin ETF will be approved soon, according to Bloomberg’s lead ETF analyst, citing Ark Invest’s filing for a Bitcoin ETF with a ticker and Valkyrie’s upgrading of its own ETF prospectus.

Balchunas also mentioned Ark Invests’ Bitcoin futures ETF application, which was filed on Oct. 13 in collaboration with 21Shares and white alpha Architect white-label, stating that the given ARKA ticker was “another good sign” that the SEC was on the verge of issuing a tick.

NOTABLE: Valkyrie just updated their bitcoin futures ETF prospectus (which typically only happens when ducks in row ready for launch). They added their ticker $BTF, altho no fee still. Can’t say this is done deal type evidence but a good sign IMO. pic.twitter.com/GlQo4C1lBc

When it comes to Valkyrie’s ETF, the analyst says he looks for “these types” of updated prospectus files when deciding whether an official SEC greenlight is on the way, adding that applicants frequently update the final details “just before” debut. However, he admitted that nothing is definite in the crypto business.

Mr. Whale downplayed the Ark Invest news, claiming that all Ark did was update its “ARKW ETF prospectus” to imply that it may obtain exposure to BTC through exchange-traded funds in Canada. 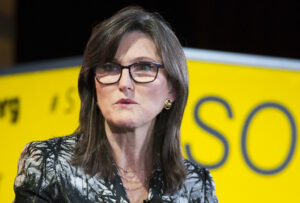 Cathie Wood had previously contributed her firm’s name to the ARK 21Shares Bitcoin ETF, ticker ARKB, which would track the performance of the world’s largest cryptocurrency as assessed by the S&P Bitcoin Index.