Artificial Intelligence : The avant-garde of warfare ? The possible changes in the dynamics of air combat are being tested by a Pentagon project. 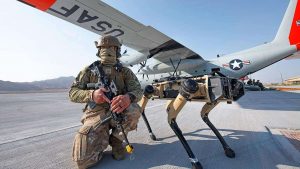 Artificial intelligence in defense and warfare is a topic that has been on the table of discussion for a while now. The accuracy and precision of AI powered applications, in addition to its ability to perform functions with superhuman capabilities adds to the intrigue of AI in the field of defense and warfare.

Computer simulated battles wherein aircrafts exhibit awe inspiring feats of action can be a forerunner of what the future could look like when artificial intelligence is added to the equation. This is made possible by AI algorithms that uses techniques to test diverse approaches over and over until the best one is discerned. This allows them to react and perform such feats with ease and precision.

A recent computer simulated battle that happened last month indicates the wide array of possibilities resting within the yet to be tested points of artificial intelligence. In the battle, two F-16’s were pitted against another F-16 at an altitude of 16,000 feet. During the course of the battle, the two F-16’s changed their track, putting forth a conflicting choice for their opponent, to pursue one. The F-16 ,on the face of the conflict, changed course abruptly, getting behind the enemy with surprising precision. And before the opposing jet could react, it launched a missile that destroyed the enemy. And the point of attraction is the fact that the steering of control of the aircrafts was in the hands of AI algorithms.

This foresight of how the future of warfare could be with AI backing was enough to get the attention of the Pentagon. Defense Advanced Research Projects Agency (Darpa) of Pentagon called in teams to work on AI systems that could control fighter jets in aerial combat, especially in cases where multiple aircrafts are involved. This could possibly prove to alter and reinvent the dynamics of air combat, wherein AI enables aircrafts to ‘swarm’ together.

In the words of Chris Gentile, ex- Air Force fighter pilot and program manager of EpiSci,

“One of the things that really stands out is the ability to enable what you would call swarm warfare-rapidly overwhelming opponents.”

According to him, a time is not far away when the pilot could partner with an AI program, basically asking it cover for him while he takes on another opponent.

These possibilities are not mere speculations since artificial intelligence has already proved its brilliance in the simulated sky. A good instance cementing this fact is the time when a human pilot was easily defeated by a fighter plane controlled by AI during a Darpa demonstration. Reinforcement learning was the techinque used by the program. It has proved to be path breaking in robotics and video games, by allowing machines to play with inhuman skill. The same technique is being used by EpiSci for Air Combat Revolution.

However, there are a lot of implications when it comes to using AI for warfare. Artificial Intelligence and its workings are still partly veiled to humans. Unleashing a technology that is yet to be fully comprehended on delicate tasks with high security requirements and involved risks is not something that is widely agreed upon. Though human-AI cooperation can be of help, a slight miscalculation or error can prove to be disastrous.

The Pentagon, however is eager to solidify the speculations into facts and establish the critical place AI can occupy in future warfare, while also keeping in mind the trust issues surrounding the workings of AI.

The technology is being tested across various fields like logistics, mission planning and even combat. The radar system controlled by an AI program, used by the Air Force last December is an indication that AI has already taken a step into the field.

The curtain is not yet raised to what the future holds. In the eventuality of artificial intelligence being deployed in defense, what is to be kept in mind is to maintain the right balance. And to have a solid knowledge as to where to use AI and where not to.