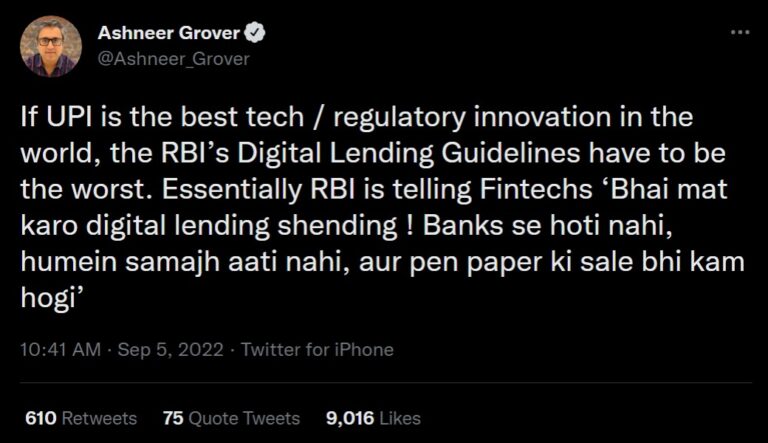 Indian businessman and co-founder of BharatPe, Ashneer Grover took to Twitter on Monday to state his views about the ‘Guidelines for digital lending’ released by the Reserve Bank of India a few days ago.

If the introduction and implementation of UPI was one of the best tech innovations in the world, the regulatory guidelines for digital lending are the worst in the world, Mr Grover said.

According to Ashneer Grover, the new guidelines are indirectly stating that fintech firms should not take part in digital lending as banks haven’t been successful and RBI still has not understood its working.

The guidelines for digital lending were issued by the Reserve Bank of India as a notification for all commercial banks, cooperative banks and NBFC companies.

The guideline stated that Regulated Entities (REs) should disclose the Annual Percentage Rate (overall cost of loan payable by Borrower annually) beforehand and that it should also be part of the key fact statement. A key fact statement is a document which contains all necessary and significant information about the loan product.

RBI has also taken into consideration the importance of data privacy and has devised guidelines which will ensure the protection of personal and financial data of customers.

Chief Executive Officer and co-founder of Biz2Credit said that the new guidelines on digital lending might negatively impact the level of trust in public towards the digital lending and digital credit products.