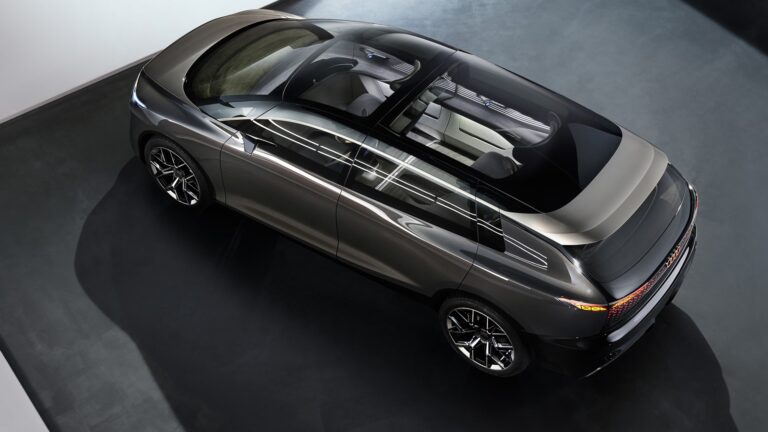 Audi unveiled the Urban Sphere concept which is specially designed with dense Chinese cities in mind. The automaker also consulted with various Chinese customers while designing the concept vehicle. It will be added to the latest Sphere series concepts.

The vehicle is a fairly large vehicle stretching 217 inches long, with a 134.4-inch wheelbase. That makes room for a lounge-style interior with four individual seats that can recline up to 60 degrees, with extendable leg rests. Alternatively, up to six seats can be fitted, according to Audi.

Rear-seat passengers get a transparent fold-down OLED screen that can be used for conference calls or streaming videos. A split-screen function lets each passenger view their own content. The Urban Sphere rides on the Volkswagen Group’s Premium Platform Electric (PPE) and has a 120-kWh battery pack and dual-motor all-wheel-drive powertrain rated at 395 hp and 508 lb-ft of torque. It’s also designed to stop the front motor in certain situations to improve efficiency. An 800-volt electrical architecture allows for DC fast charging at a peak of 270 kW, which can accomplish a 5%-80% charge in under 25 minutes, Audi claims.

The Urban Sphere is the third of a series of Sphere concepts from Audi, pointing to more daring designs for future EVs, incorporating autonomous driving. The Skysphere is a sports car concept for an era of autonomous driving, while the Grandsphere focuses on how future EV and autonomous-driving tech might look in a large sedan. The Sphere concepts are each a slightly more near-term idea of the future versus Audi’s 2017 Aicon concept, which made no provision for a steering wheel.

Traffic is a problem that seems to be getting worse and worse thanks to the swollen SUVs and trucks that are clogging the streets in ever-increasing numbers. At its core, traffic is a geometry problem; the vehicles get larger and larger, while the roads stay more or less the same size. Congestion becomes unavoidable. this is just a concept, and there’s no guarantee that Audi will ever commit to putting the Urbansphere — or anything like it — into production. The automaker has plenty of gigantic SUVs in its lineup, including the forthcoming Q9, which is expected to go into production this year.

Urbansphere is Audi’s third in a series of three concept cars that the German automaker said would “reinvent mobility as we know it today.” The first was the Skysphere, a sleek, villainous-looking electric convertible with an adjustable chassis. Next was the Grandsphere, a spacious electric sedan with an interior.