The article is the second part of a 2 part series. Here is the first part!

Compliance is not a one-time thing, it is a constant monitoring and periodic checks of the systems, to stay compliant with DoT regulations. Maintaining effective and secure compliance has multiple facets including failure notifications, change control mechanisms, and periodic reviews.

What enterprises need to focus on?

OSP Distribution – Based on Infrastructure

The primary tests for this process include checking of the basic design or the architecture of the logical partitioning while ignoring many of the trickier configurations that requires expert guidance.

As per the survey reports, a reasonable amount of distribution of the enterprises by size is done. Around 48% of the surveyed firms were of the small or the medium setups, and 52% of the other firms were large contact centers with over 700 agent seats in each.

A deeper analysis of the type of survey respondents shows that the large enterprise’s sample included 38% extra-large enterprises with 1500-7000 agents, and the remaining 62% had around 700-1500 agents.

Whereas medium-sized enterprises are taking effective measures to spread compliance awareness and have a complex system that can be manually managed. 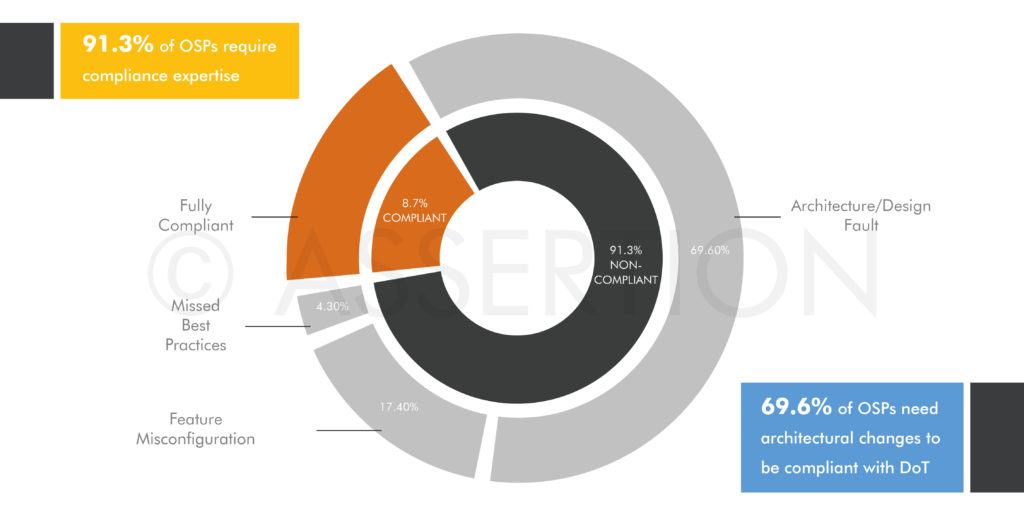 This means that the enterprises should concentrate more on getting a well-designed voice network that will resolve the non-compliance issue the organizations are facing at present. Enterprises also face the complexity of maintaining continuous compliance on systems resulting in bad configurations accumulating over time.

‘Misconfigured feature configuration’ is the category of non-compliances where specific features like mobility, redirections, hot desking, etc. were configured allowing non-compliant calls to be made.

Around 4.2% of the respondents of the survey belongs to a category where the configurations were well-designed and with configured features, but lack some of the industry best practices like access controls over the resources. These enterprises are capable of moving to full compliance with minor configuration changes.

And, the remaining 8.3% of the respondents of the survey were found to have configurations to be fully compliant.

Therefore, a major chunk of the industry is at risk of being found to be OSP non-compliant while those having expertise in absorbing more involved configurations and industry best practices are very few in numbers.

The vulnerability and security picture that we see also has two aspects to it, both of which concentrate on security and protecting the PBX from insufficient internal access controls and external malicious users.

This means that large enterprises’ IT need to shift their focus towards the voice infrastructure of the systems. While the small enterprises are capable of managing the security of their systems, as per the survey.

During our research, we learned that out of the 500 enterprise trunk configurations that we scanned, up to 55% were vulnerable to fraud.

The extra-large enterprises, with their extensive manpower and the small organizations with non-complex setups, are better at managing their trunk access controls, as only 43.24%, and 36% of their trunk resources missing adequate access controls.

Also, around 65-68% of the small enterprises (with around 300-1500 agents) were found more negligent and are prone to security breaches.