Automation and Job Security: Should we be worried? 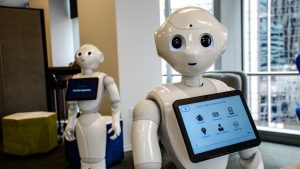 Artificial intelligence has had a commendable journey. From Frankestein to Sophia, the paths it has traversed has been lined with opportunities and potential. With its characteristic features of accuracy and efficiency, it leaves an impact that is amplified through the wide range of latent potential that can be tapped into in the future.

However, AI also does not escape the implications of the phrase, ‘a coin has a two sides.’ Likewise, artificial intelligence also adds a plus and minus sign to the equation and sometimes there is a fear of potential imbalance which could shake the foundations of humanity and push us into verge of a probable existential crisis. It cannot be denied that artificial intelligence and automation has made daily tasks much easier, efficient and time-effective, but at the same time it strips people of their jobs. The scenario depicted by Charlie Chaplin in Modern Times is perhaps true then. But there are agreements and disgreements that line this discussion making it hard to establish a solid ground for argument.

When dealing with a system controlled by humans, there often rises problems from language barriers, lack of comprehension and skill, and the inevitable human tendency to make errors. With machines, however all these problems are cancelled, opening up a faster redressal to problems and efficient solutions.

However, this raises a question about the probable situation wherein people lose their jobs. One assurance given is that, even if automation takes over some jobs, it would also create new opportunities and professions. However this does not solve the anxiety and fear of unemployment that comes in the wake of automation and artificial intelligence.

What if new jobs do not materialize?

OpenAI co-founder Sam Altman has a solution in case of a situation where new professions to compensate for the lost ones do not materialize. According to Altman, even in the absence of new jobs, people can survive with the income generated by artificial intelligence e which will pay each adult $13,500 per year. Highly idealistic and doubtfully realistic, Altman’s magnanimous view of a society thriving on income generated by machines is met with disagreement and opposition from experts who opine that Altman’s views are highly misleading and impractical. And even if this vision is realised, it will create an intellectual underclass with long term unemployment problems. Though ideally, revolutionary, this ideal is a bit too far from the concerns of reality.

In short, there is still no clarity regarding where automation will position humans in the professional hierarchy. To a large extend, this is determined by the response of organisations to this new reality that is on the rise.

Particularly with the rise of pandemic, automation has been accelerated like never before and experts point towards the ‘double-disruption’ leading to growing disparities between workers. All these emphasises the fear regarding automation and job security. However, one has to remember that this scenario is not exclusive to artificial intelligence and automation. In the wake of any new technology that complements human efforts, there will be an inevitable loss of jobs while at the same time, new opportunities will be created to compensate for the same. That’s how the wheel of progress has been functioning since time immemorial and hopefully, that will be the case with automation and AI, maintaining a balance, neither edging to a dystopia nor a utopia.