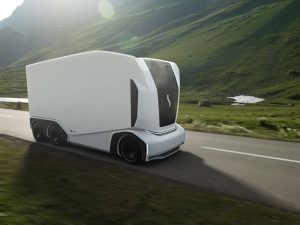 Einride, a startup based in Stockholm, Sweden, known for its groundbreaking autonomous technology has raised an amount of $110 million. The proceeds from the funding will accelerate and back the startup’s expansion to Europe and the United States.

The Series B round was led by investors like Temasek, Soros Fund Management LLC, Northzone, and Maersk Growth. These were in addition to the existing investors of the startup, EQT Ventures, Plum Alley, Norrsken VC, Ericsson, and NordicNinja who also took part in the funding round.

With the recent funding, the total funds raised by the company to date will touch a monumental $150 million. The company had raised an amount of $10 million in 2020, and a total of $25 million in 2019.

The company rolled out its operations back in the year 2016. It was the brainchild of Robert Falck, Linnea Kornehed, and Filip Lijia. The company’s services include two different types of vehicles: its electric heavy trucks that are human-driven, and its groundbreaking driverless pods, the first of its kind.

Einride’s success is primarily dependant on its ethical framework blended with a smart infusion of advancing technologies which ensures maximum customer satisfaction and retention. As per the claims of the company, in comparison to the trucks that run on diesel, which entail a pollution threat, its electric trucks facilitate the reduction of emissions by 94%, a rather remarkable rate. These trucks carry out most of the freight shuttling work. Some of its notable customers include notable names in the Swedish food production market such as Oatly, Coca-Cola, Lidl, and Electrolux.

The systematic and ordered nerve of the company is very much evident from the fact that it has created a digital platform to help the carriers with activities like planning, scheduling, and routine, in addition to managing invoices and billing.

Although these are quite impressive points for the company, the actual point of intrigue and the highlight of the startup is its Einride Pod. It is a self-driving truck that can be easily controlled remotely without the need for a cab. The vehicle was successfully tested on the roads of Sweden, and it even carried freight for Oatly, in a pilot program, presenting a clear picture of its scope and potential. While the startup’s human-powered trucks are scaling new heights, the company is also focused on working out a long-term goal of providing driverless pods for an extended customer base. As per the company, driverless pods with varying levels of autonomy and functionality will be soon made available.

The recent funding will be of substantial help to the startup in building on its operations. The company plans to use the proceeds for fulfilling existing customer contracts, in addition to doubling its workforce, which at present includes hundred people. Another major priority of the company will be to expand to the United States and Europe.