Baby Doge once again takes up the spotlight on Twitter.

Baby Doge once again takes the spotlight on Twitter following a surge in prices. It is not a new scenario where a single tweet changes the whole story of a cryptocurrency. And more often than not, this particular tweet will be by the one and only Elon Musk who has a way with tweets. Even the most normal of his tweets brings forth a surge of reactions and responses and if the wind is in the right direction, the cryptocurrency in question will have a lucky week or day ahead. Seems like the stars are aligned right for Baby Doge this time as the tweet has resulted in a rapid surge of prices and users are ecstatic. It is not every day that you see a graph touching the sky. And when it does, you cannot blame the high spirits of those who have invested in the same. 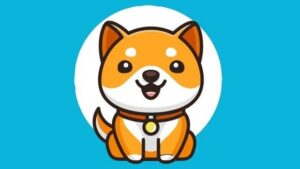 Twitter as usual is beating the rhythms of the latest trend and responses are flooding in. Quite naturally Baby Doge has rocketed to the trending list on Twitter. Yesterday, “Floki” was the talk of the Twitter town as Musk welcomed his new Shiba Inu puppy home. Crypto enthusiasts had taken this as a sign for a rather good time for Baby Doge and Dogecoin and they weren’t completely wrong. Seems like the tweet did its usual magic and now the graphs are reflecting that quite brightly. For now, Floki is adorable, let us wait and see if the affection lasts for long. After all, when it comes to crypto, you have to always keep in mind the one quote, “Change is the only constant.” Now, let us flip through the reactions and responses on Twitter.

Such a cute #BabyDoge !

Once in a blue moon scenario where looking at the graph doesn’t increase the heart rate. Or perhaps it does.

legends arent defined by their successes, they re defined by how they bounce back from their failures.#BabyDoge #BabyDogeCoin #BabyDogeArmy pic.twitter.com/v2AkysbLFa

Who said that zero doesn’t have any value?

Let’s get that other zero ! This is crazy!🔥🔥📈 #BabyDoge #BabyDogeCoin pic.twitter.com/nW5p3z9Usb

Be careful with all the jumping lest you fall. Just being realistic here.

What I said yesterday about #BabyDoge 🔥it happening today, it’s just strat it, be ready for another big jump 🔥 https://t.co/mEII8QtyTI pic.twitter.com/yXa9guQJgW