Alessandro Volta – The Inventor Of Electric Battery And The Reason Why Volt is Volt !

“The language of experiment is more authoritative than any reasoning: facts can destroy our ratiocination—not vice versa.” – Alessandro Volta

Today we write about one of the greatest brains of the world – Alessandro Volta. He is the reason why we have the various gadgets we are crazy after; cell phones, laptops, iPods, walkmans. All these have one thing in common, they need a battery and Sir Volta is the genius behind these batteries. 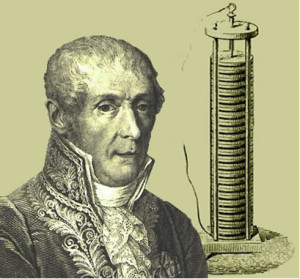 Amateur Scientist, Inventor, Teacher and Physics Professor: Electricity fascinated scientists in the late 18th century. Leyden jars were invented in 1746 which could store charge and produce a spark of electricity. In 1752, Ben Franklin conducted the famous ‘Kite Experiment’ drawing electricity from lightning.   Doctors used to treat all sorts of illness using electric shocks. Later it was realized that a continuous flow of electricity was required to put current to use.  In 1800, an Italian scientist, Alessandro Volta discovered the vintage form of battery and in his honour, Volt was termed as the unit of electromotive force.

Alessandro Volta was born in Como, Italy on 18th February 1745. Volta was interested in Physics since he was 14. Like all the other scientists, electricity amazed him too. He dropped formal studies and did not attend university. By the age of 18, Volta was corresponding with accomplished scientists and conducted experiments in the lab of a family friend. In 1769, he put forth a theory on ‘Electrical Phenomena’ in his treatise “On the forces of attraction of electric fire”. Volta continued with his electrical experiments working as an instructor in the Como Grammar school simultaneously.  In 1775, he devised a ‘perpetual electrophorus’ that could transfer charge to other objects.  In following few years he successfully isolated methane gas and burned it using an electric spark.  Volta was made professor of Physics at the University of Pavia in 1778.

A Feud over Frogs’ Legs leads to the Battery: Volta was well-known due to his early works and accomplishments. His greatest contribution to science, the voltaic pile, was developed as a part of scientific dispute with scientist Luigi Galvani. Due to observations he made during frog dissections, Galvani thought that he had discovered a new form of electricity which he called ‘Animal Electricity’. Volta argued that the observations made by Galvani were due to response towards the stimulus of electricity. Frogs themselves didn’t produce electricity. 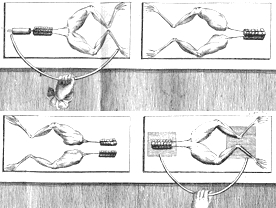 Volta realized from Galvani’s experiments that the two dissimilar metals in contact were producing the electricity. Instruments to detect weak currents were not available then. Hence, Volta tasted various combinations of metals by placing them on his tongue.  The saliva on his tongue conducted electricity resulting in an unpleasant bitter sensation. To prove his point that generation of electricity did not require any animal parts, he put together a stack of alternating zinc and silver discs separated by brine soaked cloth. When a wire was connected to both ends of the pile, a steady current flowed. He observed that the amount of current can be altered using different metals and changing the number of discs.

In a letter dated March 20, 1800, addressed to the president of the Royal Society of London, Volta reported his discovery.  The battery was a really huge success and was almost immediately recognized as a successful device. Other inventors improved Volta’s design and soon it was powering telegraphs and doorbells.

The End: The invention of battery brought him great renown but Volta preferred a quiet life. He gave up his research and teaching. He passed away peacefully in a country house at an age of 82 on 5th March 1827. His name has hence been immortalized in the form of Volt, unit of electric potential.