Beatz The App Which Completes Your Music Playlist ! 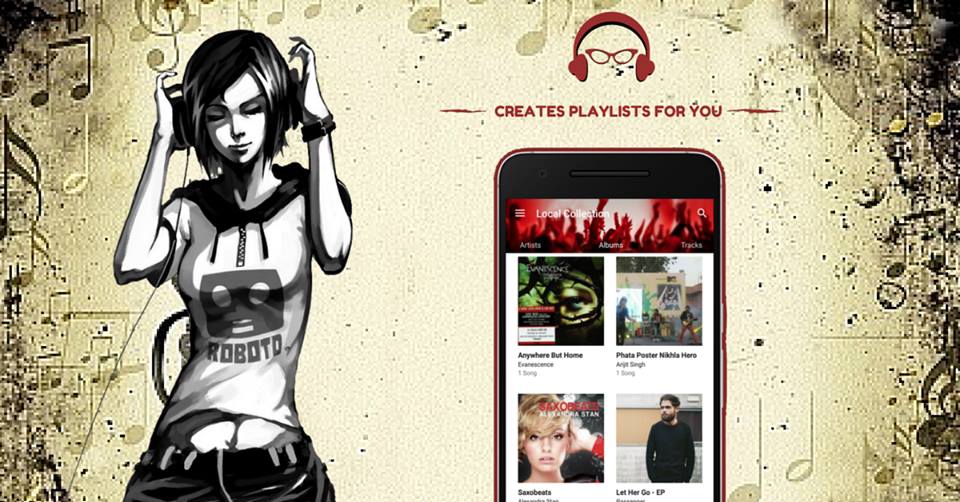 We are all musical, often without realizing it and most of us have hundreds of songs downloaded on our phones. These songs typically belong to a number of genres and categories. Songs that makes us happy or sad are typically handpicked into different playlist that triggers a particular emotional limbic area of the brain.

It requires perseverance, detective work and (where necessary) trial and error, to be able to put together a playlist that we love. But then we realize that we need more playlists. Often people tend to get bored of their current playlist and starts creating new ones. It consumes a lot of time and energy.

After spending much energy on this problem, Chandra Prakash, a computer science engineer from IIT Kanpur realized this problem on one of his unplanned expeditions where he spent most of his time on browsing through the GB’s of music files in his device, to find that one song which suited his mood.

An average user typically has around 427 songs in his music backup and hardly prefers to go for online streaming services which sends suggestions based on what everybody is listening. The ads that kept popping up in the interval was adding fuel to fire, until he finally decided to solve it by himself, and I mean literally by himself. He is the only member in his Beatz team, as he goes by the saying,

“Sometimes the most effective way to produce something is not through collaboration but by just doing it yourself.”

Chandra has the experience of working at Advanced Technology Labs (ATL) Adobe and with the Flash Runtime team at Adobe. During his second year of engineering, he was a part of the team that build the first IIT-JEE online counseling portal. He previously co-founded Citybytes, a hyperlocal news aggregation app, which automatically extracts content from the web and delivers it to the people living in the locality pointed out in the content, so that people can get to know about the things happening in their neighborhood.

Your existing app needs a better class of songs

Before the music streaming apps came into existence, everybody used to listen to songs stored locally on their phones. Not much has changed since then. Music streaming apps solved the problem of discovering new songs but as of now they haven’t been able to provide the best experience to the users. As a result, people manually curate songs, download it and listen to it offline.

Also, streaming music online is not the best experience that a song lover gets because of the poor audio quality. Streaming services use compressed file formats with relatively low bitrates, such as 256 kbps AAC files. The use of lossy compression means that data is lost in the encoding process, which means audio resolution is sacrificed for the sake of convenience and smaller file sizes. With regards to sound quality, then, these formats aren’t telling the full story of our favorite songs.

High-resolution audio files usually use a sampling frequency of 96kHz or 192kHz at 24-bit, but you can have 88.2kHz and 176.4kHz files too. Streaming songs of high resolution audio requires higher bitrates which is expensive, as it would require more internet usage and reliable network connection.

So, a lot of music lovers still prefer listening to songs offline with high quality audio. Now, even the music streaming apps allow users to download the songs for offline listening (however they still don’t offer downloading of high quality audios for free).

Have a look at the beatz timeline

Also, with the increasing storage capacity of mobile devices, the number of songs (and the quality of songs) on the users phone is also increasing. But none of the music streaming apps or offline music players have provided an automated way to organize music. They only way seems to be available right now is, segregation on the basis of album and artists.

It’s all part of the plan !

“Beatz – Smart Jukebox”, an intelligent music player, automatically creates your playlists by analyzing the beats of the song, that too completely offline. It helps you manage your huge library of songs and saves a lot of time. You just have to play one song according to your mood and Beatz starts playing your mood.

A playlist prepared by Beatz is of 30 similar songs which corresponds to approximately 120 minutes of non-stop music with the general assumption is that after 120 min, the mood of the user changes and therefore we have limited the size of playlist.

Nobody panics when things go according to the plan

Beatz hasn’ spent a single penny on the development or promotion of Beatz. The product was built in-house, had a private beta release; which proved their hypothesis that Beatz ( a smart music player) was actually required. But as it happens with most of the music player apps, people use it, love it but don’t talk about it.

We had a realization during our beta release that sharing is a core component for any app to gain popularity. But we should only ask those to share who love using the product for a good word-of-mouth popularity. That’s what we tried building in “Beatz – Smart Jukebox” and it worked.

Initially users are given certain number of credits. As they keep playing recommended songs, they lose credits. When the user has lost all the credits, the users are asked to share the app. Sharing is not mandatory as of now. But as a result of this strategy, large number of shares are seen on chatting platforms, .

To get the first 500 downloads, Beatz was uploaded on product hunt. Initially, people discovered Beatz through product hunt which helped them get their first 500 users within 2 days after the public launch, mainly in Saudi Arabia, Iraq and other gulf countries.

Later, they started getting organic installs from other countries as well. They observed that most of the installs were coming from the link provided by the share button. They have seen that almost 50% of the users who visit their play store listing gets converted.

Beatz has been downloaded in several countries mainly in the Indian subcontinent, middle-east countries, several African & south-east asian countries and fortunately they have received all good reviews for their playlists.

The guy with the plan

Currently, they focus on the product market fit.

I think growing fast is important but building a better product is more important.

Currently the process of analyzing the songs on the phone is a little slow. Mainly due to low processing speed and less RAM availability on android phone. They are working to improve the analysis time and are focusing on improving the learning model to enhance playlist quality. Beatz – Smart Jukebox is currently only on android. Users have requested an iOS version which is also under development.

They plan to have more features build around sharing. In near future, you might expect something like a playlist created by Beatz which you can dedicate to your dear ones based on what they like to listen.