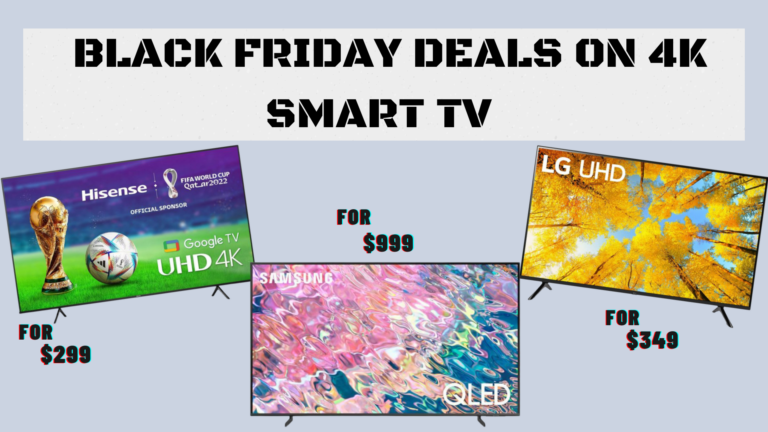 This Black Friday Sale is an excellent opportunity for you to obtain new and intriguing offerings for this sale. If you are wanting to upgrade to a new entertainment device, especially a new Smart TV through which you can watch the newest movies, TV series, and sports events, then we have the new 4K televisions arriving for big savings during this sale. Everything we know thus far is as follows:

Since the introduction of 4K televisions, it has gradually become increasingly usual in all houses to purchase and use a new 4K television. However, the TVs were first offered at a premium price, but the prices for these TVs have recently dropped.

If you want a terrific 4K Smart TV for less than $300, you can get your hands on this new Hisense 55-inch 4K UHD Smart Google TV. When compared to other 4K Smart TV manufacturers, this new TV has been among the most competitive TVs, with a range of premium features and a great set of display technologies onboard.

On the feature front, this smart TV includes HDR 10 display compatibility as well as a built-in Chromecast. You can also connect this TV to popular gaming consoles like the Xbox Series X and the Sony PlayStation 5 to improve your gaming experience. If you are wondering about from where you can buy this TV. This TV is going on sale at Target for a price tag of $299.99.

If you have a little more money and are seeking a reliable brand, you should consider this new LG Smart TV. When compared to the Hisense TV, this TV costs only $50 and provides excellent performance from reputable manufacturers.

LG has been one of the most trusted brands for many years. This TV is the 55UQ7570PUJ 4K TV, which runs on a new LG operating system called WebOS. LG has also included a dedicated new chipset that will primarily aid in 4K upscaling and AI sound.

The new “Filmmaker Mode” is one of this TV’s standout features. This option assists the television in reducing the post-processing of broadcasts and movies. LG has also included a specific Game Optimizer mode, allowing you to utilize this TV as a gaming display. Just like the Hisense smart tv, this smart TV is also being sold for a massive discount at Target for this Black Friday Season.

If you want a larger screen, you should have a look at this Samsung deal. The new 4K smart TV from the Korean conglomerate features a 4K QLED TV display distributed across a large 75-inch panel.

A 75-inch TV, particularly one from Samsung, is usually among the most costly. The TV has features such as QLED Panel and more, but thanks to Black Friday, such cutting-edge technology TVs are now available for a price reduction, bringing the price below $1000.

Like the LG Tv stated above, this Samsung Tv has a specialized processor that aids in 4K upscaling and motion smoothness, as well as compatibility with several voice assistants. This TV is available to purchase on the Newegg platform.