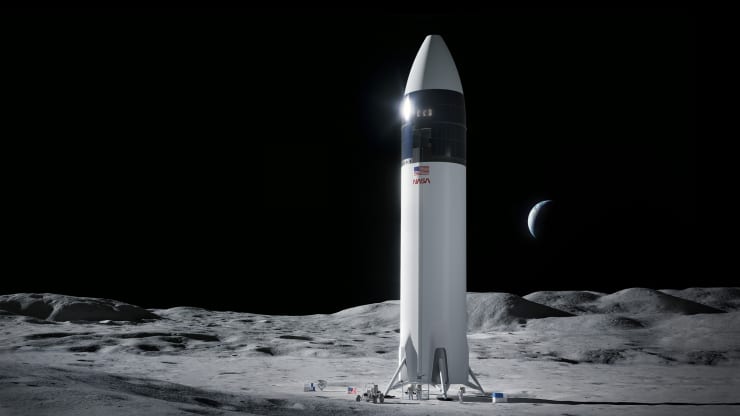 In his verdict, Federal Judge Richard Hertling sided with the defence, bringing an end to a months-long dispute that began when Blue Origin sued NASA in August.

NASA stated in a statement that now that the judgement has been released, collaboration with SpaceX would begin “as soon as possible.”

The company’s complaint, according to a Blue Origin representative, “highlighted the major safety flaws with the Human Landing System procurement process that must yet be resolved.”

A request for comment on the verdict was not returned by SpaceX.

Musk responded to CNBC’s news on the verdict with a picture from the 2012 film “Dredd” in a tweet.

After a competitive procedure, NASA awarded SpaceX the only contract for the agency’s Human Landing System programme in April. SpaceX will use its Starship rocket to send humans to the moon’s surface for NASA’s planned Artemis missions, which will cost $2.9 billion.

SpaceX was up against Blue Origin and Dynetics for what was supposed to be two contracts, but NASA only granted one owing to Congress’s lower-than-expected funding for the programme.

Blue Origin filed a complaint with the US Government Accountability Office shortly after the judgement was made, but the GAO refused the firm’s appeal in late July, prompting Bezos’ space business to accelerate its legal fight. Bezos is also the founder of Amazon, the world’s largest online retailer.

The company’s argument, according to a redacted version of the lawsuit, focuses on establishing that NASA wrongfully awarded the contract to only SpaceX and “disregarded key flight safety requirements” in the process.

Blue Origin’s allegations were denied by Hertling. The court’s ruling is now sealed since the case involves confidential information belonging to the firms, but Hertling has asked the parties to submit proposed redactions by Nov. 18 in order for the opinion to be publicly released.

During the litigation, NASA’s work with SpaceX on the HLS contract was paused, but it is set to resume on Monday.

The court’s judgement, which represents a setback for Blue Origin’s objectives, comes at a time when the firm is experiencing both success and criticism.

After stepping down as CEO of Amazon, Bezos has intensified his participation with Blue Origin. Despite the fact that Blue Origin has completed two successful crewed flights of its suborbital New Shepard rocket, the business has had high staff turnover and claims of safety difficulties, as well as a “toxic” work culture, from former employees.

Blue Origin, on the other hand, has continued to work toward Bezos’ goal for the firm, which is for “millions of people to live and work in space to benefit Earth,” particularly by relocating “industries that stress Earth into space.” Last month, Blue Origin and a group of space firms revealed Orbital Reef, a private space station that would be sent into orbit later this decade.